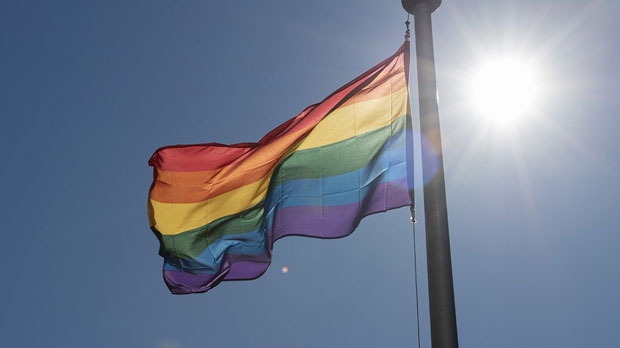 A Pride flag waves above Toronto Police Headquarters on June 1, 2017.

Catholic schools in Toronto will raise the Pride flag next month for the first time ever.

In a TCDSB virtual board meeting on Thursday evening, the board voted in favour of proclaiming Pride Month every June and raising the flag at the Board office and at all TCDSB schools.

“We recognize that this is an important step required to demonstrate the TCDSB’s ongoing commitment to fostering inclusive environments that are safe and welcoming places for 2SLGBTQ+ students and staff," TCDSB Chair Joe Martino and Director Brendan Browne said in a statement Friday morning.

The Board of Trustees has voted in favour of proclaiming Pride Month every June starting in 2021; & that the Pride flag be flown at the Board office & all #TCDSB schools for the month of June.

Wong-Tam spoke at the board meeting and said Pride Month should be celebrated to encourage inclusivity at all TCDSB schools.

“By raising the rainbow flags and proclaiming Pride Month, you can take action to protect LGBTQ2S students by working to create a strong, caring and affirming community. One that cherishes a diverse school community - one that is fair-minded - one that is prepared to demonstrate love in bold, colourful action,” she said.

Former Ontario premier Kathleen Wynne also spoke to the board and said it needs to send a clear signal to their students and staff that they are committed to an inclusive learning environment.

“As you all know, I am not Catholic I am however a member of the United Church of Canada so as a member of the Christian community I believe with you that the teachings of Christ are explicitly about the inclusion of everyone in our love. Equity means that in order to give someone that love and support we sometimes have to go that extra mile,” she said.

However, not all delegates that spoke at the board meeting were in favour of raising the flag.

Father Michael Simoes, a priest of the Archdiocese of Toronto, said raising the flag would be “fatally undermining the mission of the TCDSB.”

“As one courage member related to me when this was brought up, ‘the Pride flag is a lie.’ It’s not about diversity, inclusion and acceptance. It’s about conformity, exclusion and intolerance,” he said.

The TCDSB’s decision to raise the Pride flag comes a month after the Waterloo Catholic District School Board voted in favour of raising the flag.

Catholic schools in Halton Region, however, will not raise the flag this year after their board recently voted against the motion.

Pride Month is celebrated every June in Toronto.

a) Pride Month be proclaimed every June starting in 2021 - PASSED!

b) The Pride flag be flown at the TCDSB Catholic Education Centre from June 1-30 - PASSED!

c) Every school in the TCDSB raise the Pride flag from June 1- 30 PASSED!