Toronto is currently dealing with an "unprecedented" number of gypsy moths this year, a caterpillar-turned-moth that poses a serious risk to trees across the city.

“We're certainly well aware of the fact it's a bad year for these gypsy moth larvae, etc. and that we are doing our best to deal with it,” Mayor John Tory said.

Residents have been reporting numerous sightings of dark and hairy gypsy moth caterpillars, which possess distinctive red dots on their backs.

Gypsy moths are known to emerge across the Greater Toronto Area in the spring, but this year large amounts of the insects appear to be popping up in more areas in the city.

“What we're seeing is gypsy moth is moving and we're seeing populations of gypsy moths roll larger in parts of the city that have never experienced it before,” Toronto Forest Healthcare Inspector Joel Harrison-Off told CP24. 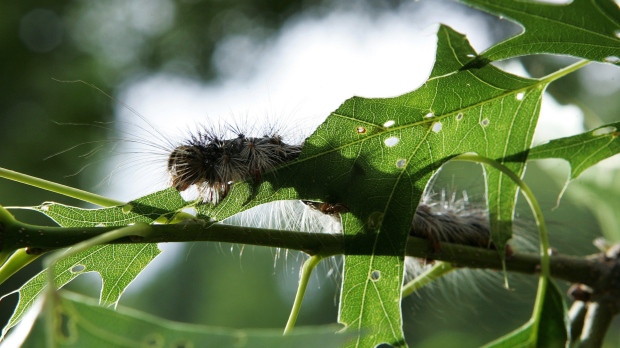 A representative for pest control company Orkin Canada said the province is seeing an "unprecedented" influx of gypsy moths this year.

“I'm not gonna lie, this is the biggest year that we've seen into our call center where we've had thousands upon thousands of local residents that have been calling us across the province. Its been an uptick that has been unprecedented,” Bernie Grafe told CP24.

Despite being unwelcome critters by many, the caterpillars feed on tree leaves before forming a cocoon and transitioning into a moth, causing severe defoliation to trees.

The loss of leaves can stress the trees and make them more vulnerable to harm from other insects, diseases and weather fluctuations, according to the city.

Harrison-Off said the insects’ impact on trees is an ongoing issue the city has been battling.

“The defoliation on trees that hasn't been seen in these parts of the city before, it's raising a lot of concern and it's also drawing us into these areas more trying to come up with plans in terms of how to deal with it into the future,” he said.

Most healthy trees can withstand one to several years of severe defoliation by gypsy moths but some tree species are more vulnerable to the insects.

“For us, the concern is where we have oak dominant stands in the city, these are the types of trees that actually can die and go intp to decline from heavy feeding of gypsy moth. A lot of other trees, maples, norway maple, birch, bass woods, they can recover.

In previous years, the city has used aerial spraying of a pesticide to target large areas with a high prevalence of gypsy moths. However, the city opted not to use the spray in 2021.

“I think people don't understand that you don't just kind of use that sort of spray all the time. This is a year in which there wasn't a planned spray but there are measures being taken to do things to the trees and to treat the trees,” Tory said.

The city determines the need for an aerial spray after extensive egg mass surveying.

Due to small areas of gypsy moth populations, city staff decided to schedule a variety of ground-based treatments on roughly 5,000 city-owned trees this year.

Using an aerial spray now would be ineffective as caterpillars likely won’t be affected by the pesticides, Harrison-Off said.

For residents coping with their own gypsy moth infestation, the city says they can try to trap the caterpillars with a burlap cloth on their trees. 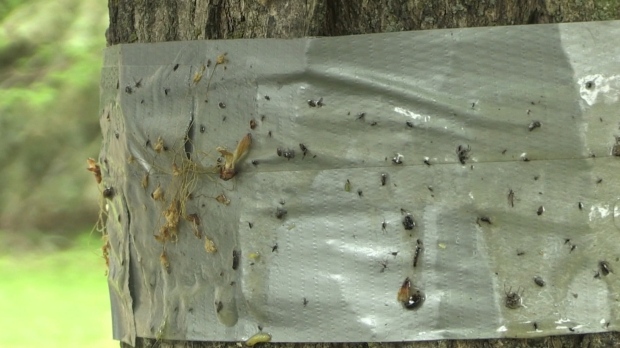 To prevent future gypsy moth outbreaks, Grafe recommends that residents search for any signs of eggs on their trees in May or early spring.

“Beginning of spring, you're going to inspect those trees, look for the little gray eggs, remove those, and put those in soapy water [to destroy them]” he said.