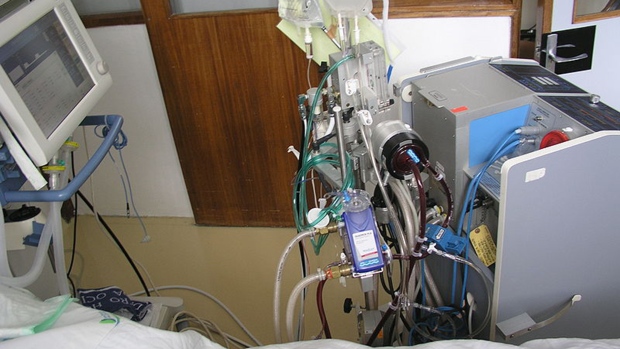 An ECMO machine underway is seen in a hospital in Lisbon, Portugal in 2010. (Wikimedia Commons/Cmenesesoliveira)

When a ventilator isn’t enough to save someone struggling to breathe with COVID-19, a team at a downtown Toronto hospital has spent the last two months taking over the lung’s primary function of delivering oxygen to the blood for the sickest and sometimes surprisingly young patients.

The specialized unit at Toronto General Hospital uses Extra-Corporeal Membrane Oxygenation (ECMO) machines to transmit oxygen into blood cells, turning them from blue back to red, when the lung is so badly hurt it can no longer do that on its own.

The machines have become the tool of last resort in areas hard hit by the novel coronavirus, such as Wuhan, China and Lombardy, Italy, with mixed success.

“Sometimes the lung is so injured, even if you put enough oxygen – there not enough gas exchange taking place, and it can cause more lung damage.”

So instead the patient is hooked up to an ECMO machine, which Cypel says “replaces the function of the lung like the dialysis function for a kidney.”

But the process to attach a patient to the machine is complex.

A team of surgeons and nurses draw blood from a large vein in the body, bringing it to a machine with a pump and an artificial membrane that recreates the process of adding oxygen to the blood and taking away carbon dioxide.

That blood is then put back into a different vein in the body.

Cypel says his unit has the capacity to treat 25 patients at any given time.

So as the COVID-19 pandemic started to reach Toronto hospitals in mid-March, and knowing that ECMO machines were used as a last resort in other countries, Cypel and other doctors at Toronto General developed criteria for how sick someone would need to get before being put on the machine.

“The patients we select for this are the sickest ones, if we did nothing their chance of dying was 90 per cent plus,” Cypel said.

They also could not have major comorbidities beyond common conditions such as diabetes, and most importantly, they needed to be young.

“We know that patients over the age of 65 – they won’t do well whatever you do – so we reserve this treatment for patients who are very sick but have the highest chance of survival.”

The oldest patient was 65. The youngest was only 21.

Some patients recover after seven to ten days of treatment with the system, others needed a month.

“For us it hasn’t been very different from a bad flu season in that regard,” Cypel said of the volume of COVID-19 patients they’ve treated at Toronto General.

Some patients are still undergoing treatment, but so far the survival rate for ECMO patients has been 60 per cent.

“You have to keep in mind,” Cypel says. “The patients we select for this are the sickest ones, and if we did nothing their chance of dying was 90 per cent plus.”

An early study out of Wuhan found similar numbers, with close to 50 per cent of patients on ECMO dying of septic shock or organ failure.

The key to COVID-19 treatment with ECMO, Cypel says, is careful monitoring.

“Pretty much every surgeon can be trained to put these tubes in and initiate the device but the critical part to success is to have a very well trained team to monitor the patients in the subsequent days.”

He spoke of COVID-19 patients suffering from sudden blood clots or drops in organ function.

Cypel hasseen data from hospitals in Paris, where ECMO is being used. And somehave been reporting 60 or 70 per cent survival rates, while another saved just 10 per cent of patients.

The Ministry of Health told CP24 that the province did not consider adding more ECMO machines at Toronto General or elsewhere due to the pandemic.

“For purposes of Ontario’s COVID-19 pandemic planning, there is currently not a need to increase ECMO resources as they have been sufficient for the demand.” Spokesperson Denelle Balfour said.

But they were never needed.

“We were always far away from our simultaneous cases which we felt was the limit although we could have had some expansion on that,” Cypel said.

Asked if any COVID-19 patient thought viable for ECMO treatment was ever turned away, Cypel says no.

“We didn’t feel like we restricted the use of this technology because we didn’t think we’d had enough.”

The hospital is already preparing for when things return to some version of normal.

As the number of COVID-19 cases in intensive care slowly declines, Cypel says his unit can get back to helping complete lung transplants.

“Things are improving and we are ramping up activities and the number of donors seems to have increased over the last week.”