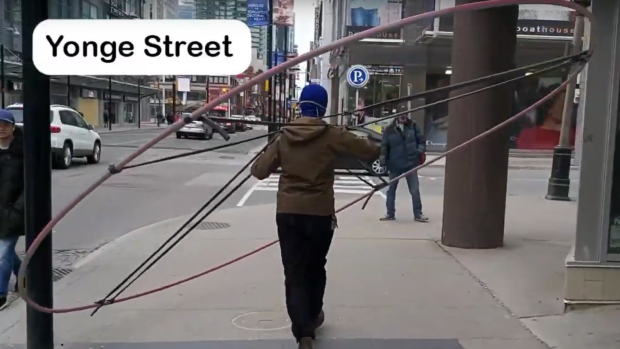 In a video posted on YouTube, author, artist, and “urban geographer” Daniel Rotsztain puts his “social distancing machine” to the test to show exactly how much space is needed to maintain two metres of distance from other people. (YouTube/ Daniel Rotsztain)

A Toronto resident has found a clever new way to demonstrate just how difficult it is for pedestrians to follow social distancing rules while walking on Toronto streets.

In a video posted on YouTube, author, artist, and “urban geographer” Daniel Rotsztain puts his “social distancing machine” to the test to show exactly how much space is needed to maintain two metres of distance from other people.

Rotsztain said it took him about 45 minutes to construct the “machine,” a pink contraption made of plastic and rubber tubing.

He convinced his collaborator and friend Bobby Gadda to strap on the social distancing machine and attempt to walk around some of Toronto’s busiest neighbourhoods, including Kensington Market.

The experiment, which was filmed by Rotsztain and shared online, showed Gadda repeatedly running into obstacles, including cyclists, pedestrians, light standards, and cars, while trying to navigate city streets.

On multiple occasions, he was forced to walk into live lanes of traffic to maintain a safe distance from others.

Speaking to CP24.com on Monday, Rotsztain said he decided to make the video after seeing how challenging it was for pedestrians to get groceries and run essential errands safely.

“I just wanted to contribute to that conversation and kind of make a funny, accessible video that could be shared widely,” he said.

In an effort to slow the spread of COVID-19, public health officials have recommended people remain two metres apart while in public spaces, including while walking on sidewalks and shopping at groceries stores.

Torontonians who do not respect the two-metre rule at city parks and public squares could face a hefty fine thanks to a new city bylaw enacted earlier this month.

“I think that even in the pre-COVID times, in the best of times, the inequality of space between cars and pedestrians in Toronto is very obvious,” Rotsztain said.

“Once quarantine kind of hit and we are all in this new paradigm…now it is really obvious how little space pedestrians have. It is almost impossible to safely navigate the city.”

Rotsztain is urging the City of Toronto to shut down major streets, including Yonge Street, during the pandemic to ensure pedestrians can keep a safe distance from others.

If the city is not prepared to take that step, he noted that there are other things that could be done to improve the situation for pedestrians.

“I know Brampton has widened the sidewalks and has created temporary bike lanes…There are many things you can do besides entirely closing the streets,” he said. “I think that if enough people are saying this, then it is the duty of politicians to listen to their constituents.”

Overall, Rotsztain said his message has been very well received by members of the public, including Jennifer Keesmaat, Toronto’s former chief city planner, who shared his video on social media.

“Streets are essential pedestrian infrastructure for maintaining a safe physical distance as essential workers walk to work, we get groceries, and walk for sanity in the dense part of our cities,” Keesmaat wrote on Twitter. “Easy policy fix: designate some lanes currently wasted for driving, for walking.”

Toronto-Centre city councillor Kristyn Wong-Tam, who has been advocating for some major streets to be closed to vehicular traffic amid the pandemic, also shared Rotsztain’s video on Twitter.

“Keeping a minimum distance of 2-metres on narrow sidewalks is impossible as shown here and why people #TakeTheStreet,”she wrote.

Mayor John Tory told CP24 on Monday that he is not necessarily against the idea of designating “one-way sidewalks” but said he does not support closing certain streets to cars.

He said the move may have the unintended consequence of attracting more pedestrians to streets that have been closed to traffic.

Rotsztain rejected that assertion, suggesting that residents in the city know now is not the time to gather.

“We often associate closing down streets to cars with celebrations like Open Streets Toronto or Taste of the Danforth, but it is a different world right now,” he said. “I think Torontonians understand that gathering is not what the city needs to help flatten the curve.”