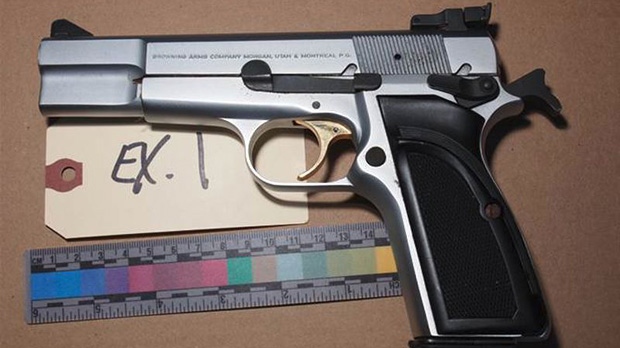 Toronto police arrested two 18-year-old men on Monday and charged one of them with numerous offences after a handgun was pointed at pursuing officers.

Patrol officers were in the area of Tobermory Drive and Finch Avenue West Monday when police said they spotted two young men and approached them.

Police said the pair fled in separate directions, with one of them running through a community park, into a ravine behind an adjacent building. When officers caught up to the man in the ravine, he allegedly drew a handgun from his waistband and pointed it at officers.

The officers urged the man to drop the gun, and he complied, tossing the handgun aside.

Both men were taken into custody. Police seized a loaded 9mm handgun and a quantity of marijuana.

Derick Freeman, of Toronto, faces 14 charges including pointing a firearm, carrying a concealed weapon and possession for the purpose of trafficking.

Dominic Wright, 18, of Toronto, was charged with possession of proceeds of property obtained by crime and possession of a Schedule II substance for the purpose of trafficking.

Both men appeared in court at Old City Hall Tuesday, July 7 at 10 a.m.