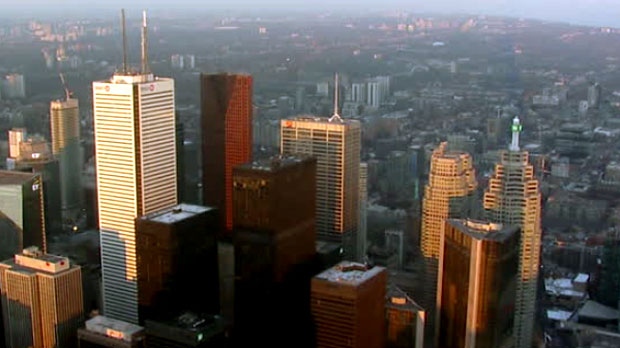 TORONTO -- Toronto is often an outlier in terms of public opinion across the province on various topics, such as immigration and climate change, a survey has found.

Research conducted on behalf of the Mowat Centre, a think tank at the University of Toronto's Munk School of Global Affairs, found that otherwise, there are not many general differences of opinion across the regions.

But a main finding of the research is that Toronto seems to be different than other regions.

“Toronto in many ways is a region unto itself in terms of public opinion in Ontario - that is to say, it is frequently somewhat of an outlier,” the authors of a report write.

“The frequency with which opinions in Toronto stand somewhat apart from those in the other regions of the province suggests that the factors and experiences that shape these opinions in the inner metropolitan 416 area are somewhat unique.”

Those factors include age, education, ethnicity, the concentration in the city of service industries relating to government, the broader public sector and the financial sectors, and a greater reliance on certain public services, such as public transit.

For example, the research found that about 52 per cent of Torontonians disagreed that immigration is causing too many changes in Canadian society, compared with about 40 per cent in most other regions.

More than half of the residents in most other Ontario regions disagreed that Canada should accept more immigrants from parts of the world experiencing conflict. But Toronto was the only region where residents were more likely to agree - 56 per cent - than disagree with that statement - 39 per cent.

The report's authors, Kiran Alwani and Andrew Parkin, say more can be attributed to that difference than just Toronto having the highest proportion of foreign-born residents.

“The idea that attitudes in Toronto are a simple by-product of the greater number of immigrants living in the city seems too simplistic,” they write. “On the two questions just discussed...views in Toronto differ as much from those in other urban areas with significant immigrant populations (notably the 905 region of the GTA), as those from regions with far fewer immigrants (such as the North).”

On climate change, the authors noted that what stood out was not a split between urban and rural areas, but a significant difference between Toronto and its urban neighbours. When asked to rank various priorities, Torontonians were most likely to prioritize addressing climate change - at 53 per cent - compared to 39 per cent in the Greater Toronto Area and 36 per cent in Hamilton-Niagara.