Protesters in Toronto disrupted rail traffic in the northwest end of the city to show support for the Wet’suwet’en First Nation in northern British Columbia.

The group met in Dovercourt Park on Saturday morning and marched north to the tracks near Dupont Street and Bartlett Avenue.

The protestors prevented CP Rail freight trains from coming through the area for the past few hours. The demonstration ended around 5 p.m. 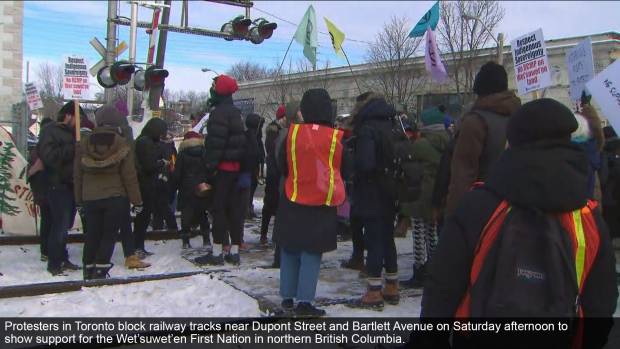 Service on GO Transit’s Barrie Line was briefly interrupted on Saturday due to the protest but service has now resumed.

Police were on scene and officers told CP24 that as long as the protest remains peaceful, they have no intention in intervening.

In B.C., multiple people were recently arrested near a worksite as the RCMP enforced an injunction against the Wet’suwet’en First Nation’s hereditary chiefs and their supporters, who are opposing the Coastal GasLink pipeline.

The situation has sparked protests outside the province, including one near Belleville that has halted VIA Rail service between Toronto and Ottawa, and Toronto and Montreal.

Ontario Provincial Police said Friday that they are monitoring the protests in Belleville to ensure public safety but no one has been arrested. 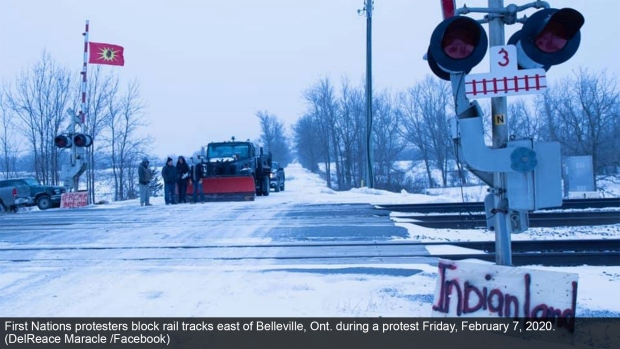 “VIA Rail will be automatically refunding all segments affected by this service disruption,” the company said in its online travel advisory. “We are asking passengers to check our online tools for departures and arrivals updates.”