Toronto reported Friday its first three cases of the Omicron coronavirus variant, bringing the total known cases in Ontario to 11.

In a news release, Toronto Public Health (TPH) said two of the three residents who tested positive for the variant of concern (B.1.1.529) had returned from a trip to Nigeria while the other one travelled to Switzerland.

"These are the first cases of the Omicron variant of concern which have been confirmed by whole genome sequencing, reported in Toronto," TPH said in a statement Friday evening.

"TPH's case and contact management team is currently following up with these cases and is providing instructions to identify close contacts on isolation and testing."

Dr. Anna Banerji, a pediatric infectious diseases specialist, said she is concerned but not surprised that one of the cases involved a traveller who did not return from one of the southern African countries affected by the federal government's travel restrictions.

"The whole world is so interconnected. Someone flying from South Africa can go to any part of the world," Banerji said.

"I think it's a fallacy to say, to think that we control Omicron by just blocking travel from south Africa unless the whole world shuts down all travel. You can't lock it. Already, it's here."

Banerji said while there are still many unknowns about Omicron, she is worried about how the variant is spreading quickly, especially in South Africa.

"We need to watch it and again, continue to be vigilant and be careful, especially as the holiday season approaches," she said.

Infectious diseases epidemiologist Maria Sundaram said it's likely that there is already community transmission in the province.

"We're lucky that South Africa scientists were able to identify it and alert the world. But it doesn't mean that it's not already here sort of on our front doorstep," she said.

"With regard to how transmissible it is, the initial data seems to show that it's very transmissible. In fact, it's out-competing the Delta variant in South Africa right now, which is very scary. We don't really have very much data on the potential severity of the illness. So that's one thing that I'm continuing to look for."

A total of five new cases of the Omicron variant were reported Friday, with the other two also in the Greater Toronto Area.

York Region Public Health said its first case of the variant was identified in a child under the age of 12 from Vaughan. Meanwhile, Durham officials confirmed a second case of Omicron in the region.

Dr. Kieran Moore, Ontario's chief medical officer of health, said earlier this week that it was just a matter of time before more cases were detected in the province.

Toronto's first cases were confirmed the same day TPH notified the public about a COVID-19 exposure at a downtown restaurant linked to a suspected case of the Omicron variant. 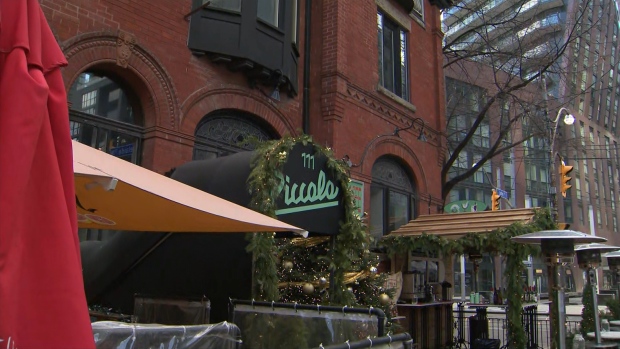 TPH said that an employee of Piccolo Caffe E Vino, located on John Street near Adelaide Street, who tested positive for COVID-19, was at the restaurant between 9 p.m. and 2 a.m. on Nov. 26 and Nov. 27.

Officials said the case is being investigated as a suspected Omicron variant due to the individual's recent travel history to South Africa.

Public health officials are asking anyone who was at the restaurant within that time frame to get tested for COVID-19 immediately and monitor symptoms for 10 days after their last visit.

"There is no risk to anyone attending the establishment outside of these dates and times,' officials said in a news release issued Friday.

"TPH has followed up with all known close contacts and asked these individuals to self-isolate for 10 days and to go for testing."

TPH added that the restaurant did not keep a customer contact log for dine-in patrons, as required by the Reopening Ontario Act, and is currently under investigation.