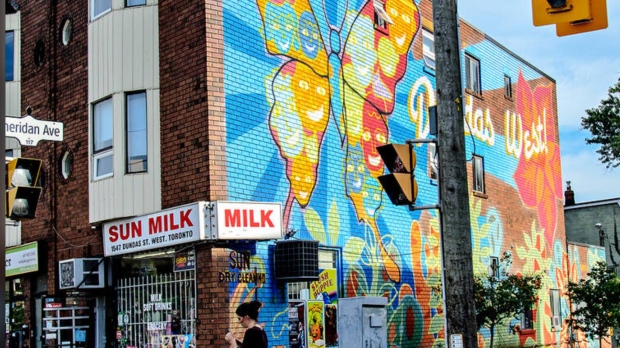 A photo of a colourful mural in Toronto's Dundas West neighbourhood. (Time Out Group photo)

Toronto's Dundas West area is among the 51 "coolest" neighbourhoods on the planet, according to a survey by Time Out Group.

Dundas West, from Trinity Bellwood Park to Lansdowne Avenue, came in 12th place in the latest edition of the Time Out Index, which ranks the coolest streets and neighbourhoods for fun, food, culture, and community.

Described as a "culture consumer's paradise with boutique art galleries, snug bars, understated nightclubs and enough cosy coffee shops to keep you buzzing along," the west-end Toronto enclave, known by some as Little Portugal, is one of just three neighbourhoods in Canada to be included in the international media group's list.

The top spot went to the Colonia Americana neighbourhood in Guadalajara, Mexico.

The neighbourhood list comes months after Time Out Group released its ranking of the "coolest" streets in the world. Toronto's Ossington Avenue placed 14th on the list of 33 streets.