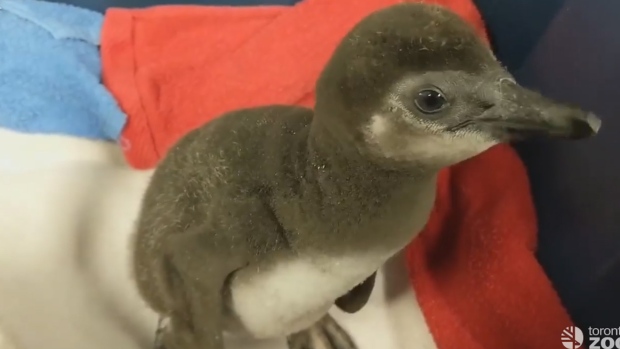 A baby African penguin is the newest addition to the Toronto Zoo. (TheTorontoZoo /Facebook)

The Toronto Zoo is welcoming the arrival of a new African penguin chick which hatched last month.

According to the zoo, Ellie and Chupa encountered “parenting problems” with their second chick and that’s why the second couple, Flap and Shaker, were brought in to finish the incubation period and raise the new chick.

Incubation usually takes about a month and chicks stay with their parents for about three weeks after hatching.

“The arrival of this endangered African penguin chick signifies a great achievement for these penguin parents and the African Savanna Wildlife Care staff,” the zoo said in a news release. “The Toronto Zoo was able to reach 100% of our SSP pairing and breeding goals with the success of this breeding season. The African penguins at the zoo help draw attention to this imperiled species.”

According to the release, the African penguin is one of the most endangered penguin species in the world, with the population size of wild African penguins having dropped by more than 97 per cent over the past century.

The birds are threatened by food shortages due to climate change and over-fishing, disease, predators, and oil spills and recent estimates suggest there could be as few as 25,000 breeding pairs left in the wild, the zoo said.

The gender of the new chick is not yet known, as male and female African Penguins don’t have visible physical differences.

The chick is not currently available for public viewing.