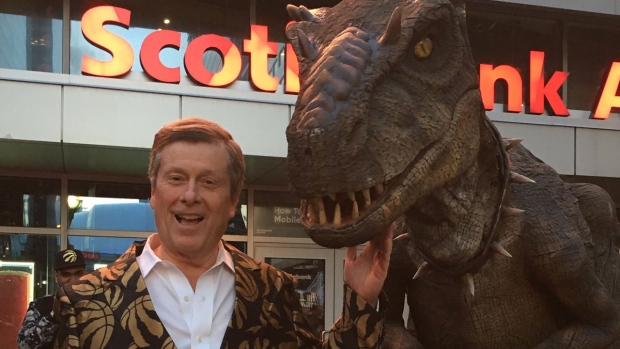 Wearing a blazer with gold Toronto Raptors logos on it, Toronto mayor John Tory poses with a man in a dinosaur costume at Jurassic Park outside Scotiabank Arena ahead of Game 1 of the NBA Eastern Conference final between Toronto and Milwaukee Bucks in Toronto on Wednesday, May 15, 2019. THE CANADIAN PRESS/HO - Twitter, @JohnTory

Mayor John Tory is hoping that Toronto can beat Oakland both on the court and in the donation box.

Just hours ahead of the start of Game 1 of the NBA finals at Scotiabank Arena, Tory has announced a “charity challenge” for both Raptors and Warriors fans to participate in.

The glory will go to whichever charity raises the most money from basketball fans, according to Tory.

“Our @SickKids patients are ready to cheer on the @Raptors, are you?” he said in a message posted to Twitter on Thursday morning. “Help our city win on and off the court by supporting the @SickKids Foundation.”

In addition to the charity challenge, Tory said that he also made a small bet with Oakland Mayor Libby Schaaf on the result of the NBA Finals.

Should the Golden State Warriors win their third straight title, Tory says that he will send a case of Henderson beer, a peameal bacon sandwich, some Tim Hortons coffee and some Toronto-centric apparel from the Spacing store to Schaff.

But should the Raptors emerge victorious, Schaff says that she will send Tory some coffee from local roaster Red Bay Coffee, some beer from local brewery Old Kan Beer & Co. as well as some barbecue sauce from Oakland restaurant Everett and Jones BBQ.

Spoke with Oakland Mayor @LibbySchaaf last night. We both agreed this @Raptors vs @Warriors #NBAFinals is an excellent moment to see which city can raise more money for a good cause. Toronto will be supporting @SickKids Foundation while Oakland supports the @ACCFB + @SFMFoodBank. pic.twitter.com/KU5j8liDx3