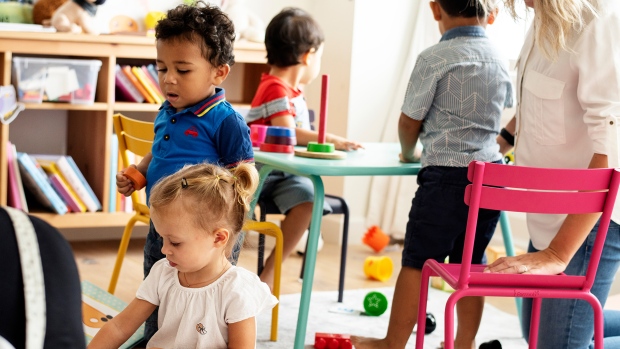 Mayor John Tory says that he is “very concerned” that some of the limits placed on child care centres will have the effect of reducing the capacity of the system and “leaving a whole bunch of parents out of luck” as they return to work.

Child care centres are permitted to reopen as of today but they will have to abide by dozens of new rules, including one that will cap the combined number of staff and children in any defined space at 10.

The guidelines will also prohibit cohorts of children and staff in any given space from interacting with other cohorts in the centres.

In an interview with CP24 on Friday, Tory said that he is worried that those rules will either reduce the number of child care spaces available or inflate costs by forcing centres to seek out additional space.

“These are all understandable requirements but I think we are going to have to take a very hard look at the capacity of system and make sure we don’t leave a whole bunch of parents out of luck where they have to go back to work because the emergency benefits are running out and they need the money and yet there is no childcare for them,” he said. “I think we run the risk of a secondary problem arising out of the good news of the reopening if we don’t pay attention to this.”

Education Minister Stephen Lecce said earlier this week that “the reality is that not all parents will be putting their children back” in childcare and that his government’s plan to limit capacity will allow operators “should they want to, to optimize their full licensing capacity” so that no children are left without a space.

Tory, however, said that he is not too sure that will be the case.

He said that he worries that operators might have to “to raise fees in order to take on more space or have more staff” and the cost will become “prohibitive” for parents.

“It is something that I am going to keeping a very close eye on and speaking with the provincial government about,” he said.

While childcare centres are legally permitted to reopen today, the vast majority have said that they need more time to get ready.

The province, after all, only announced that childcare centres would be permitted to reopen on Tuesday afternoon and did not release the guidelines that they would be expected to abide by until late Tuesday night.

“When we heard the announcement on Tuesday the entire sector was shocked. Early childhood educators had no notice that they were going to be maybe going back to work today and what we really heard from childcare programs is that they are just not ready,” Alana Powell, who is the executive coordinator for the Association of Early Childhood Educators Ontario, told CP24 on Friday morning. “They need more time, they need more money. Just having the group sizes be smaller along with additional cleaning responsibilities, we just can’t have that falling onto ECE’s without additional supports.”

Premier Doug Ford has said that there is no pressure on centres to reopen and that if it takes them a “week or 10 days” to do so safely, that is OK.

“I would rather be careful,” he said. “There is no emergency.”