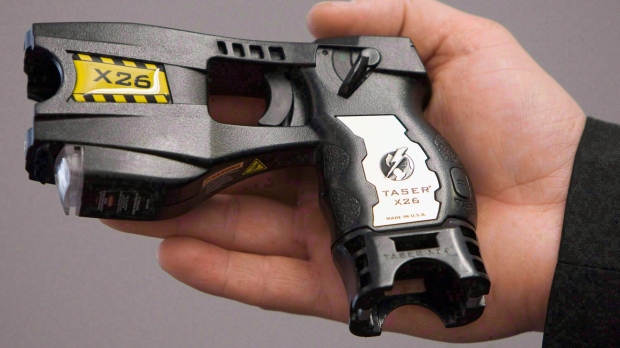 A police-issued Taser is displayed at the Victoria, B.C., police station. (The Canadian Press/Jonathan Hayward)

A 51-year-old Toronto police officer has been charged in connection with an October incident where a break-and-enter suspect was allegedly shocked three times with a conducted energy weapon and kicked after he surrendered.

Toronto police say that on Oct. 7 at about 12:50 a.m., two officers were dispatched to the Yonge Street and St. Clair Avenue West area for a report of a break and enter.

The suspects fled the scene in a rideshare vehicle and the officers gave chase.

When they stopped the car, the suspects got out and fled on foot.

One of the suspects then surrendered to pursuing officers.

Police say that “while the suspect was being handcuffed,” an officer drew his conducted energy weapon and fired its prongs into the suspect, shocking him.

The officer then allegedly switched the conducted energy weapon to “drive stun” mode, where the electrical contacts on the end of the weapon can be pressed directly to a person’s skin.

The officer allegedly shocked the suspect twice in this manner.

He allegedly also kicked the suspect.

On Monday, police identified the officer as Mehrdad Mahmodian.

He was charged with assault with a weapon, assault, and attempting to obstruct justice.

He is expected to appear in court on Jan. 4 at 1000 Finch Avenue West.

Police say Mahmodian has been an officer for 11 years and is currently with 53 Division.

Investigators say Mahmodian has been suspended with pay since the incident.