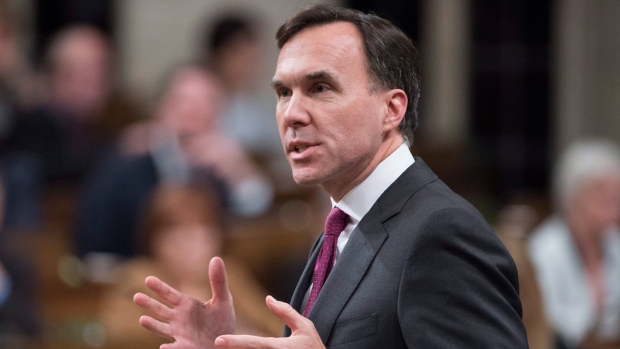 Minister of Finance Bill Morneau responds to a question during Question Period in the House of Commons Thursday Nov.30, 2017 in Ottawa. THE CANADIAN PRESS/Adrian Wyld

OTTAWA -- The federal government won't negotiate an end to the Trans Mountain pipeline crisis in public, federal Finance Minister Bill Morneau said Wednesday as he prepared to sit down with Alberta Premier Rachel Notley in hopes of getting the Kinder Morgan project back on track.

Jagmeet Singh, meanwhile, waded into the impasse in Ottawa by proposing that the Trudeau Liberals work with the British Columbia government on a joint reference question to the Supreme Court of Canada, fast-tracking a resolution to what the federal NDP leader calls jurisdictional issues arising from B.C.'s objections to the project.

Morneau said Ottawa is looking at several "financial options" to ensure the Alberta-B.C. pipeline expansion gets built, including taking a monetary stake in the project. But any federal investment in the pipeline would first require closed-door talks with Kinder Morgan and the two provinces, he added.

Project architect Kinder Morgan upped the ante this week by declaring it would suspend all non-essential spending on the project until there is more certainty it won't be blocked by British Columbia's NDP government.

The finance minister, who was expected to sit down with Notley late Wednesday, said he intended to reinforce the Trudeau government's "resolute determination" to keep the project on track.

An emergency federal cabinet meeting Tuesday in Ottawa buttressed that determination, Morneau said, although he wouldn't speculate on whether penalizing B.C. financially -- such as by withholding transfer payments --remained an option.

"I'm not going to publicly negotiate with any one of the parties," he said. "Public threats, in my estimation, aren't helpful."

The federal Liberal government, citing its jurisdiction over infrastructure projects that cross provincial boundaries, granted approval of the project in 2016. Substantial work has not yet begun, however, thanks to protests from environmental groups and court challenges that aim to prevent construction.

Opponents of the pipeline fear potential oil spills along the B.C. coast and argue that Indigenous communities have not given their consent to the project, violating their constitutional rights.

B.C. is also part of a lawsuit against Ottawa arguing there was not proper consultation with Indigenous communities or other stakeholders when the pipeline was reviewed. A decision in that case is expected any day.

More than 30 Indigenous communities along the pipeline's route support the project, but many other communities in B.C. do not.

Singh, who has long stood in opposition to the project on the grounds that it was approved under what he calls flawed environmental assessment rules adopted by the previous Conservative government, said Wednesday the Trudeau government should, in tandem with B.C., ask the Supreme Court for a reference to resolve what he calls jurisdictional issues.

It would be a much faster way of answering legal questions over jurisdiction than the lengthy court battles the B.C. government has threatened, said Singh.

"This is a way forward that is uniting people."

The federal government has long maintained it holds full jurisdiction over natural resource projects that cross provincial boundaries, but the B.C. government disagrees, saying the potential environmental consequences give it authority that trumps Ottawa.

The Liberals earlier this year rejected the option of going to the Supreme Court, fearing both the time such a step would take and the suggestion of doubt about jurisdiction when Ottawa firmly believes there is none.

Kinder Morgan has said it wants questions over the project's future resolved by the end of next month.