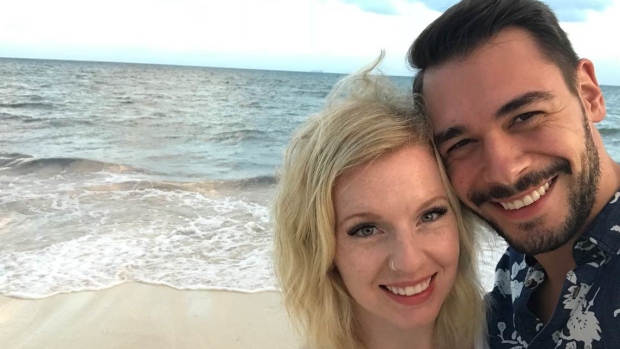 Katie Summers and her husband Tristan Bauer are shown in this undated handout image the Mayan Riviera, Mexico. Summers cancelled her wedding anniversary trip three times over the past 18 months. Now, the Omicron variant of COVID-19 means her January vacation to Hawaii with her husband may be added to the scrap heap. THE CANADIAN PRESS/HO

OTTAWA - Katie Summers cancelled her wedding anniversary trip three times over the past 18 months. Now, the Omicron variant of COVID-19 means her January vacation to Hawaii with her husband may be added to the scrap heap.

“This one is a bucket-list trip for us,” says the 34-year-old radio host from Calgary.

“But it's so expensive, because you're budgeting for testing ... your flight might get cancelled randomly and you have to pay for a hotel. It just suddenly has made travelling not as fun anymore.”

The prospect of sunny beaches and the threat of lost deposits have kept them from calling off the vacation so far.

“We're kind of taking the wait and see approach at this point,” she says. “We're not going to make any decisions until some kind of clarification or new information comes out.”

Summers is one of many Canadians second-guessing their travel plans as information trickles out about Omicron, even as travel and tourism stakeholders see slivers of optimism in the latest updates.

Hotel and resort operators remain hopeful the strain is less serious than previous ones, says Walt Judas, CEO of the Tourism Industry Association of B.C.

“But the news changes daily,” he said. “The biggest worry for our members is that things will shut back down again.

“Any further clampdowns, as far as border crossings are concerned, would be seriously detrimental to our sector,” he said, noting cross-border travel is critical to ski resorts over the holidays.

“Whistler is picking up - it's not where it normally is,” Judas added, though he said large resorts in the interior have seen a wave of cancellations after the recent flooding in southern British Columbia.

Meanwhile, hotels in Victoria and Vancouver are enjoying healthier bookings this month, in part due to the “slight return” of conferences and special events, he said.

But Beth Potter, CEO of the Tourism Industry Association of Canada, says the hoped-for surge in December travel and hospitality has not come to pass, while some guests have already called off holiday trips due to anxieties around Omicron.

Complicating matters are new measures by the United States that require all foreign travellers to show a negative COVID-19 test taken within one day of departure.

The Canadian government also announced last week that air travellers entering Canada, except for those coming from the U.S., will now need to be tested upon arrival at the airport and isolate until they get their results, even if they are fully vaccinated against the virus.

Canadians returning home by air or land after more than 72 hours abroad must show proof of a recent negative COVID-19 molecular test as well.

Nonetheless, analysts at ATB Capital Markets say airline stocks have rebounded slightly from an Omicron-induced dip over the past two weeks after preliminary data emerged suggesting the variant may not be as severe as initially feared.

“We view data coming out of the U.S. as a positive leading indicator for demand trends in Canada heading into the holiday season and 2022,” ATB said in a note to clients.

Critical questions about the fresh strain remain unanswered, including whether it causes milder or harsher symptoms and how effectively current vaccines can inoculate against it.

In response to the detection of Omicron, Canada quickly imposed travel measures to curb the spread that include banning visitors who have recently travelled through 10 African countries.

A passenger waits beside their luggage at the departure terminal at Toronto Pearson Airport, in Mississauga, Ont., Friday, May 24, 2019. THE CANADIAN PRESS/Chris Young