Tropical storm Isaias makes its way through Quebec, with strong winds and rain 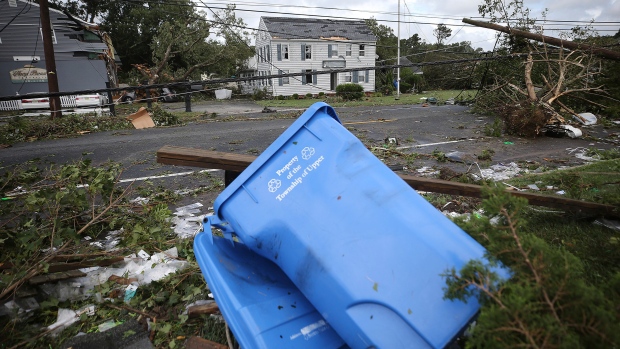 Debris and damage after a tornado ripped through Marmora, N.J. during Tropical Storm Isaias on Tuesday, August 4, 2020. (David Maialetti/The Philadelphia Inquirer via AP)

MONTREAL -- Tropical storm Isaias is blowing through the southern part of Quebec, bringing with it strong winds and heavy rain and causing power outages that have left tens of thousands in the dark.

Environment Canada issued a special weather statement for parts of Quebec and New Brunswick early this morning, warning that the weather system was making its way through the Eastern Townships and towards Trois-Rivieres while transitioning to a post-tropical storm.

Montreal saw rainfall between 70 and 90 millimetres over the course of just a few hours, the agency said, noting that the rain was weakening as the storm moved across the St. Lawrence River.

It said it recorded maximum sustained winds of 74 kilometres per hour.

Environment Canada reported that the storm has been moving north-northeast at a rate of 50 kilometres per hour towards New Brunswick.

Meanwhile Hydro Quebec said upwards of 50,000 customers are in the dark, mostly along the storm's path and warned that more outages could come as the storm plows onward.

"Our crews are ready to restore power to affected customers," it said in a tweet.

The Canadian Hurricane Centre, part of Environment Canada, was predicting that the storm would continue moving north-northeast until Thursday morning, winds weakening along the way.

Isaias hit Canada after first pummelling the United States, spawning tornadoes and causing fires and floods after making landfall in North Carolina as a hurricane.

It left at least six people dead in five states, and displaced dozens of others.