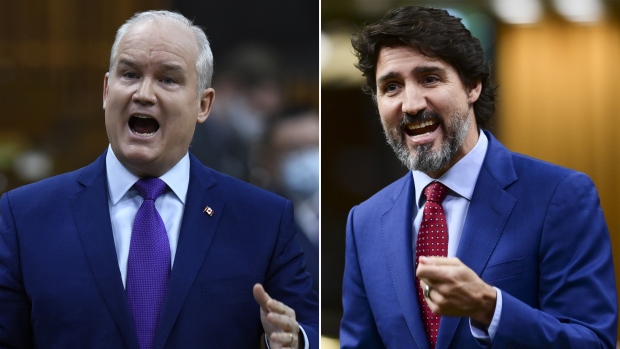 OTTAWA -- Liberal Leader Justin Trudeau says Conservative rival Erin O'Toole is pandering to the gun lobby with his promise to repeal a ban on what the government has long characterized as assault-style firearms.

The Tories quickly accused Trudeau of distorting the debate by repeatedly referring to the guns as "assault weapons" during a campaign stop Wednesday.

In Vancouver, Trudeau said it is inconceivable, at a time when Canadians are worried about gun violence, that the Conservatives would pledge to reverse the federal measure.

"You can't be anywhere in the Lower Mainland or indeed, across the country, without hearing people concerned about community safety," Trudeau said. "And that is why we are committed to continuing to strengthen gun control when the Conservatives are committed to weakening gun control."

In May last year, the Liberals banned some 1,500 firearm models, including the popular AR-15 rifle and the Ruger Mini-14 used to kill 14 women at Montreal's Ecole polytechnique in 1989. It means they cannot be legally used, sold or imported.

Earlier this year, the Liberals introduced legislation proposing a buyback of the banned firearms, though owners would be allowed to keep them under strict conditions, including registration and secure storage of the guns.

The legislation, which died with Parliament's recent dissolution, would also have allowed municipalities to ban handguns through bylaws restricting their possession, storage and transportation.

The Conservative election platform says the party would scrap the May 2020 ban on a wide variety of guns and review the Firearms Act with input from police, gun owners, manufacturers and the public.

"We will then update legislation by introducing a simplified classification system and codifying it in law so that it is clear what types of firearms fit into each category and classification systems can be made quickly, and with the public and firearms owners having confidence that they are not arbitrary," the document says.

Trudeau said O'Toole is "pandering to the gun lobby and is going to make assault weapons legal again."

Mathew Clancy, a spokesman for the Conservative campaign, took issue with the terminology used Wednesday by Trudeau, indicating the firearms banned in May 2020 are not full-fledged "assault weapons." The Tories have consistently characterized the prohibition as a bid to take firearms away from law-abiding citizens.

In addition, sport-shooting advocates have defended the use of semi-automatics like the AR-15 and question whether there is evidence to show the effectiveness of outlawing such firearms.

"As prime minister, Mr. O'Toole will not repeal the ban on assault weapons," Clancy said. "We do not know what facts Mr. Trudeau is using to justify this baseless claim."

Gun-control advocates have generally welcomed the 2020 ban on guns like the AR-15 as a step toward making Canadians safer from firearm violence.

The group PolySeSouvient said while the Conservatives are promising to repeal the ban, the Liberal legislation tabled this year "would make it easy for them to do so."

By backtracking on their 2019 election promise to buy back "all" newly prohibited weapons, the Liberals are allowing tens of thousands of fully functional military-style guns to remain in private hands, the group said Wednesday.

Further, the Liberals are giving owners reason to keep them, "as all they have to do is sit back and wait until a future Conservative government reverses the prohibitions -- and then we'll be back at square one."

This report by The Canadian Press was first published Aug. 18, 2021.