Trudeau hands out advice on Halloween, saying 'sacrifice' necessary for many 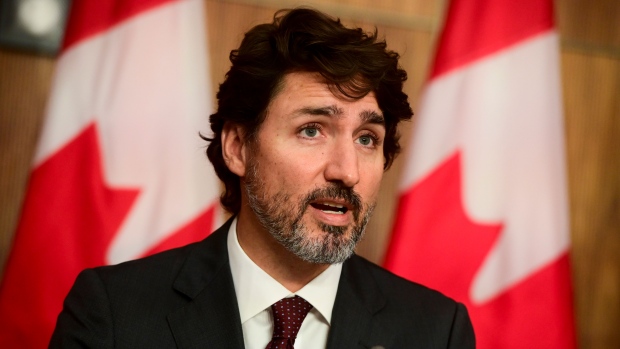 Prime Minister Justin Trudeau takes part in a press conference during the COVID pandemic in Ottawa on Tuesday, Oct. 13, 2020. THE CANADIAN PRESS/Sean Kilpatrick

OTTAWA - Prime Minister Justin Trudeau is urging Canadians to stick to local health guidelines when considering how to celebrate Halloween next week.

The question of how to handle the spooky evening is top of mind for many parents who are trying to assess a patchwork of regional health advice, guidance and stern warnings against trick-or-treating.

Health authorities in Ontario have advised against it in the hot spots of Toronto, Peel Region, York Region and Ottawa.

But Quebec Premier Francois Legault has said the pastime can go ahead if participants wear face masks and head out with family rather than friends, even though the province is Canada's viral epicentre.

“We know that it's not easy, and it's frustrating,” he said Tuesday. “Unfortunately all of us are having to make sacrifices of different types, particularly kids.”

The Trudeau family lives in Ottawa, which has a Stage 2 designation, so the prime minister said his children are staying home.

“Listening to public health officials means that my family will not be going trick-or-treating this year, because in Ottawa and in Ontario in red zones like Ottawa they are not encouraging or not recommending trick-or-treating, and therefore we won't be,” he said.

“A friend of mine suggested that maybe we could do an Easter-style treasure hunt for candy throughout the house and yard, and that's something that we're also reflecting on,” Trudeau said.

“I think families will be creative in how they respond to giving their kids as fun a holiday as we can while always listening to public health officials and respecting local guidelines.”

In a message aimed partly at young people, the country's top physician encouraged Canadians who use TikTok, Instagram and other social media to spread the word about healthy habits in order to keep the coronavirus “on a slow burn.”

“As each part of the country is experiencing the pandemic differently, people may be facing uncertainty about what action is needed to keep ourselves and our loved ones safe,” said Dr. Theresa Tam, Canada's chief public health officer.

“What is certain is that our response requires a collective effort. Everyone's actions matter.”

The COVID-19 death toll has continued its grim march over the last few days, nearing 10,000 in Canada as severe illness caused by the pandemic rises and hospitalizations ramp up, Tam said.

The total number of deaths reached 9,778 on Monday. The past seven days saw an average of 950 patients in hospital daily including nearly 200 in critical care, resulting in 22 deaths per day on average, she said.

Canada has now reported 201,437 cases, including close to 22,000 active ones currently, according to numbers compiled Monday evening. Tam said 3,289 new cases were reported by that time.