Senior members of the Liberal government are “engaged very closely” with the City of Toronto on a number of infrastructure projects and funding could be forthcoming in the upcoming budget, Prime Minister Justin Trudeau suggested at a news conference on Wednesday.

Mayor John Tory has been pushing for federal funding for the city’s $2.6 billion, 10-year plan to repair crumbling community housing buildings since assuming office and on Wednesday the mayor made his pitch while meeting with Trudeau at city hall.

Following the 45-minute meeting, Trudeau stopped short of promising funding for housing in Toronto but seemed to leave the door open for a possible announcement down the line.

“(Infrastructure) Minister (Amarjeet) Sohi and others have been engaged very closely with the mayor and officials here at city hall to ensure we are spending on the right things to both create jobs and economic activity right now but also lead towards greater prosperity and growth in the medium and long-term,” Trudeau said in response to a question about TCHC funding. “The infrastructure investments that the mayor is counting on are not a problem. They are part of the solution to the challenges that Canada has been facing and that is exactly what we are serious about tackling.”

In the absence of provincial or federal funding for TCHC repairs the city has accelerated the awarding of its one-third share of the cost, though that money is expected to run out this year and the TCHC has previously warned that some units will likely have to be boarded up in 2017 if neither government comes to the table.

Speaking alongside Trudeau on Wednesday, Tory said he reminded the Prime Minister of the critical need for TCHC funding during their meeting and stressed the fact that the city is “ready to move.”

“We have had a need for a long time that has been clearly identified that will help with energy savings and will help to improve the homes of thousands of people that are currently substandard and to put people to work,” he said. “We are ready to work with the government and to do it right as the Prime Minister said but also to get on with it.”

Trudeau’s comment comes amid a report by The Canadian Press on suggesting that the Liberal government is in fact prepared to move up spending schedules and hand out federal infrastructure quicker than initially planned due to the worsening economic conditions.

Of the $60 billion in promised infrastructure funding, only $17.4 billion was expected to be delivered during the next four years.

“Mr. Morneau (Finance Minister Bill Morneau) is here in the city today meeting with people, talking about the needs they have and putting together what is going to be a very strong budget to create growth in Canada ,” the Prime Minister said when asked about imminent announcements for Toronto. “We look forward to presenting that in the coming weeks and months.”

Trudeau thanks Tory for leadership on Syrian refugee file

Prior to taking reporter questions on Wednesday, Trudeau took a moment to thank Tory for the city’s role in helping thousands of Syrian refugees resettle in Toronto.

The Prime Minister said that residents have opened their “homes, hearts and wallets” to the refugees; something he said is a “credit to Toronto and by extension to all of Canada.”

“I just want to once again publicly thank John for his extraordinary leadership,” Trudeau said.

Trudeau’s appearance at city hall was the first made by a sitting Canadian Prime Minister since Jean Chretien attended a tribute to developer Joe Foti in council chambers in 1998.

To mark the occasion, hundreds of Torontonians showed up at Nathan Phillip Square and mobbed the Liberal leader as he entered the building.

A large crowd was also on hand to listen to Trudeau in the city hall atrium following his meeting with Tory.

"I am looking forward to a long and productive relationship between the federal government and the City of Toronto," Trudeau told reporters. 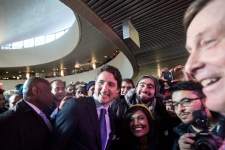 Prime Minister Justin Trudeau (centre) poses for a photo with people in the crowd as Toronto Mayor John Tory (right) looks on holds following a news conference in the rotunda at Toronto City Hall on Wednesday, January 13, 2016. THE CANADIAN PRESS/Chris Young