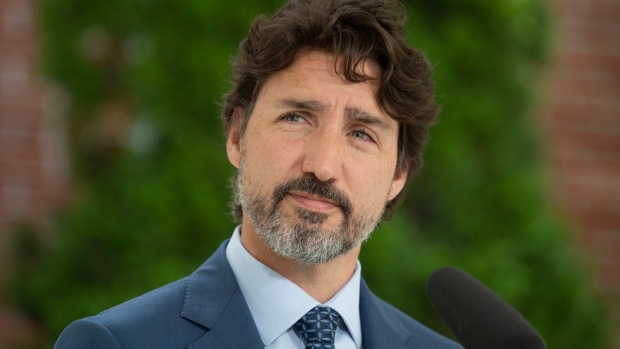 Prime Minister Justin Trudeau listens to a question during a news conference outside Rideau Cottage in Ottawa, Monday June 22, 2020. Trudeau will be among some 600 prominent politicians, business leaders and journalists featured at one of the world's largest tech conferences. THE CANADIAN PRESS/Adrian Wyld

The moves came one day after Canada saw its credit rating downgraded by one major agency over the massive increase in government spending meant to help Canadians through the COVID-19 pandemic.

The launch of the Canada Student Service Grant, which is the centrepiece of Ottawa's new support to students, comes two months after it was first announced by Trudeau and just in time for younger people who haven't been able to find summer jobs.

Back in April, Trudeau announced plans for the grant, a way of giving students chances to earn some money while volunteering in “national service” activities related to fighting the pandemic.

Eligible students are to receive grants of $1,000 to $5,000 to support the costs of post-secondary education in the fall, with the amount of each grant dependent on the time the recipient devotes to volunteer work.

The grant program is part of a multi-pronged, $9-billion investment by the federal government to cushion the economic impact of the pandemic on young people that also includes money for thousands more summer-job placements and internships.

“There are fewer jobs and many co-op, internship and community-service placements because of the pandemic,” Trudeau said during one of his regular COVID-19 news conference outside his Ottawa home.

“So if you're a student and new grad, we're creating tens of thousands of jobs for you. We're making sure that you can still learn new skills, gain valuable work experience, make money for the year ahead and contribute to your community.”

Youth Minister Bardish Chagger later acknowledged that students will be able to access more than one program at the same time as she defended the two-month delay in rolling out the measures.

“We really wanted to ensure that we put the checks and balances in place and that the program would actually deliver meaningful opportunities but also be safe for young people to participate given the COVID context,” Chagger told The Canadian Press.

As Trudeau was promising more support for students, he faced questions about his government's handling of the country's finances.

The questions were sparked by one of the three largest credit-rating agencies in the United States, Fitch Ratings, which announced Wednesday that it was downgrading Canada's credit rating from triple-A - the highest possible score - to AA+.

Fitch blamed the move on “the deterioration of Canada's public finances” due to the COVID-19 pandemic, adding public health measures needed to slow the spread of the illness and depressed oil prices “will cause a severe recession” in Canada this year.

Parliament's budget officer also reported Thursday that the government's decision to provide a one-time payment to Canadians with disabilities will cost $595 million.

He also noted that provincial governments will need about $195 billion in liquidity by the end of 2021 for their own programs, straining a different set of public finances.

Trudeau defended his government's fiscal record and was unapologetic about having spent billions during the pandemic.

The Liberals' latest estimate of the cost of the total package of pandemic-related aid was about $153.7 billion, but the parliamentary budget officer's running tally estimates the cost at $169.2 billion.

“We came into this situation with one of the best balance sheets in the G7, and we put that to work for people,” he said.

“We've made sure through various programs that Canadians could not only protect themselves through this pandemic, but also hold our economic standing so that when we get out of this, as we restart, our economy will come roaring back.”

Later in a pre-taped interview for the virtual Collision tech conference, Trudeau said he doesn't anticipate having to eventually raise taxes on Canadians to pay off the debt burden accumulated during the pandemic.

“We're not worried about having to raise massive amounts of money through taxes,” he said. “We know that as the economy gets back to normal with low interest rates, we're going to be able to handle the increased debt burden without asking citizens to cough up more of their money, or companies.”

That said, Trudeau reiterated that his government is committed to a platform promise to ensure that tech giants pay their fair share of taxes.

“Everyone should be paying their fair share and the tech giants haven't been doing that in the past.”

Trudeau also told the conference that, thanks to investments in pandemic-related innovation, Canadians companies have been able to retool to make personal protective equipment that is in short supply globally.

While Canada had to import massive amounts of masks, gowns and other protective equipment initially, Trudeau said: “We're now getting to a place where we're close to self-sufficient on that and able to turn around and share with the world, particularly the developing world.”

Conservative Leader Andrew Scheer blasted the Liberals for years of deficit spending in the lead up to the pandemic, which he argued was a major contributing factor in Fitch's decision to downgrade Canada's credit.

“When these temporary measures wind down as it relates to the pandemic, we're still going to be dealing with the massive deficits that Justin Trudeau has accumulated over the past few years,” Scheer said during a news conference in Regina.

“He has done nothing to show Canadians how that is going to change. So he owns this credit downgrade. This downgrade is a signal of a loss of confidence in Justin Trudeau's ability to lead Canada through the recovery.”

Scheer made the comments as he proposed that Canadians receiving the Canada Emergency Response Benefit continue to get the benefit even if they return to work, with the $2,000-per-month payment reduced depending on their employment income.

The Conservatives have argued that the current policy of cutting off CERB recipients who make more than $1,000 per month is a disincentive to getting Canadians whose jobs have been affected by COVID-19 back to work.

This report by The Canadian Press was first published June 25, 2020.

- With files from Joan Bryden