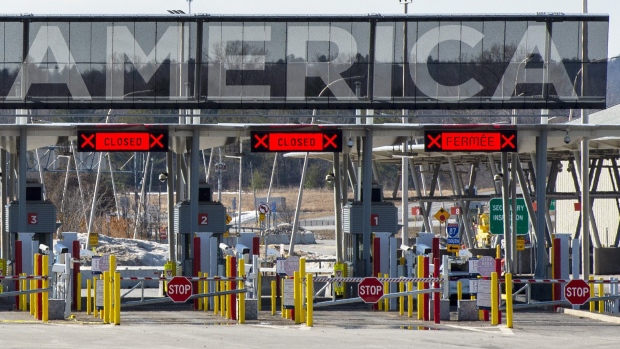 The United States border crossing is seen Wednesday, March 18, 2020 in Lacolle, Que. Justin Trudeau says Canada will need stronger screening measures to deal with an anticipated increase in the number of people entering the country from the United States. THE CANADIAN PRESS/Ryan Remiorz

WASHINGTON -- The federal government needs stronger measures to deal with a coming influx of people from the United States, Prime Minister Justin Trudeau said Tuesday - evidence that Canada is bracing for the challenge of existence next door to the world's largest COVID-19 hotspot.

The gradual reopening of businesses and loosening of mobility restrictions in both countries will likely mean an increase in cross-border traffic, Trudeau said, and with it the need for additional steps to make sure new arrivals are adhering to self-isolation protocols.

“We are looking at stronger measures to make sure that we're following up appropriately on people who come over,” he told his daily briefing outside the front door of his Rideau Cottage residence.

“As economic activity starts to ramp up, as restrictions get loosened across countries, it is likely that we see either a few more people returning home or a few more people trying to cross the border, and we need to make sure that the measures we bring forward are going to keep Canadians safe.”

The mutual ban on non-essential travel between the two countries, an agreement that went into effect in March and was extended by an additional 30 days last month, is now scheduled to expire May 21. Trudeau would not say whether he expects the restrictions to be extended a second time or be lifted before the end of next week.

Provincial leaders, in particular Ontario's Doug Ford, have made it clear in no uncertain terms that they don't want visitors from the U.S., where the novel coronavirus has exacted its heaviest toll: the active U.S. caseload is currently more than 1 million, and more than 81,000 Americans have died of COVID-19.

President Donald Trump, who faces the daunting task of trying to get re-elected in November on the heels of the worst economic collapse since the Great Depression, has been aggressively lobbying states to ease stay-at-home restrictions and get residents back to work to refire the American economy.

Public health officials, however, have been calling for a more gradual, cautious approach. As Trudeau was speaking, Dr. Anthony Fauci, the pre-eminent U.S. expert on infectious diseases, was warning a Senate committee in Washington of what could happen if state governments don't adhere to federal guidelines for restarting the economy.

“The consequences could be really serious,” said Fauci, who testified via videoconference from a self-imposed precautionary quarantine after a senior aide to Vice-President Mike Pence tested positive for the virus.

Ongoing talks between Canada and the U.S., both on the border as well as other matters of mutual interest, have been positive and constructive, Trudeau said. But whatever the outcome, it will be governed in Canada by an abundance of caution, he added.

“Preventing transmission from outside of Canada into Canada, once we have controlled the spread within Canada, will be an essential part of ensuring that we don't fall back into a second wave that could be as serious as this wave we're going through, or even more so,” he said.

“So we're going to be very, very careful about reopening any international travel, including the United States, before we feel that it is time.”