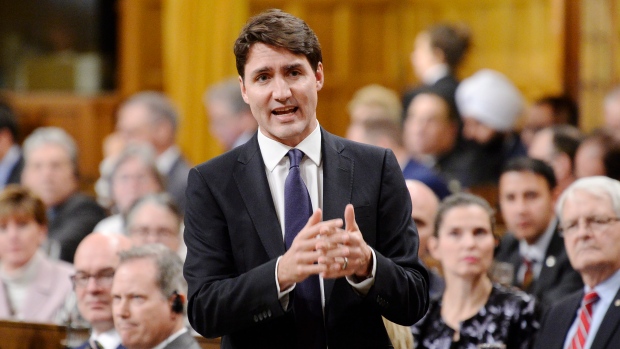 Prime Minister Justin Trudeau responds during question period in the House of Commons on Parliament Hill in Ottawa on Wednesday, Dec.5, 2018. THE CANADIAN PRESS/Adrian Wyld

Speaking to Montreal radio station 98.5 FM today on the anniversary of the 1989 Ecole Polytechnique massacre, Trudeau did not rule out a full ban when asked by the host.

The prime minister says the government is looking at different alternatives to address a situation he called unacceptable. But he says the goal is to limit the easy access criminals have to handguns and assault weapons.

In 2015, Trudeau campaigned on a promise to get handguns and assault weapons off the streets, but gun-control advocates recently criticized the government for failing to follow through.

Today's comments come as Montreal marks the 29th anniversary of shootings that killed 14 women at the Ecole Polytechnique engineering school.

Trudeau is scheduled to join Premier Francois Legault and other dignitaries at the end of the day at a memorial event on Mount Royal.