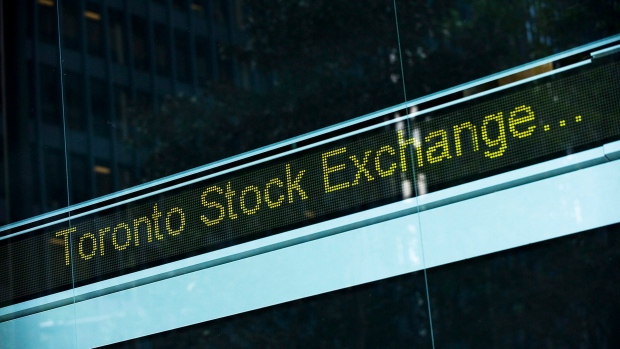 A Toronto Stock Exchange ticker is seen at The Exchange Tower. (The Canadian Press/Aaron Vincent Elkaim)

TORONTO -- The Toronto stock market piled on more losses Monday as traders continued to sell off risky assets like equities and commodities amid signs that the U.S. Federal Reserve is getting ready to cut back on stimulus and more worry about China's economic rebound.

The Canadian dollar continued to feel the pressure of a rising greenback but the currency was well off sessions lows as strength in the greenback moderated mid-afternoon and oil prices rose sharply. The loonie closed down 0.27 of a cent to 95.37 cents US, after earlier falling as low as 94.75 cents US, its lowest level since early October, 2011.

Markets started to nose-dive last Wednesday after Fed chairman Ben Bernanke signalled that the U.S. central bank feels economic data has improved to a point where it could start to wind up its bond buying program this year and wrap it up by the middle of next year.

Central banks have kept interest rates low by various means, including the Fed's bond buying program, to stimulate the economy -- providing a major boost to U.S. stock markets. For example, the Dow is still up 10 per cent year to date.

"(Bernanke) actually picked up his forecast for economic growth, (and) because of that he is saying he may actually be able to remove or lessen the stimulus," said Allan Small, senior adviser at DWM Securities.

"And you would think that would be a positive."

Analysts say the spike late Thursday in the country's interbank lending rate to over 13 per cent was part of an effort to trim off-balance-sheet lending that could threaten the financial stability of the world's second-largest economy.

But markets feared the move could also hurt economic growth. China's major state-owned banks are unwilling to lend to any but their biggest clients, so the vast majority of smaller businesses must rely on informal lending.

Indications that the Fed will ease up on its US$85 billion of bond purchases each month continued to send the U.S. dollar and bond yields higher. The benchmark 10-year Treasury stood at 2.55 per cent late Monday afternoon, off highs of over 2.636 per cent earlier in the morning. But that is still up from 2.25 per cent prior to Bernanke's news conference last Wednesday and from 1.6 per cent in early May.

"When you see the 10-year bond go from 1.6 per cent to 2.6 per cent, that's a huge phenomenon that doesn't happen that quickly (normally) and I think that is a major thing that is spooking everyone," Small said.

"You're looking at interest rates on the rise."

The stronger greenback also helped depress commodity prices and raise concerns about demand. That is because a stronger greenback makes it more expensive for holders of other currencies to buy oil and metals, which are dollar-denominated.

Elsewhere in the gold sector, slumping gold prices have resulted in Barrick Gold Corp. (TSX:ABX) intensifying its downsizing plan. The miner is eliminating about 100 jobs or almost a third of its corporate staff at its headquarters in Toronto and other offices. Barrick is also dealing with operational and regulatory issues at some of its mines and projects. Barrick shares fell 43 cents to $17.28.

Traders also looking at what damage heavy rains and flooding will have on Alberta's energy business.

Enbridge Inc. (TSX:ENB) is working to contain and clean up a weekend spill of synthetic crude into a wetland area and small lake in northern Alberta. Enbridge also shut other pipelines in the area as a precaution, including the Athabasca and Waupisoo pipelines, as the province grapples with major flooding, including in the city of Calgary where Enbridge has its head office.

Enbridge said in its initial assessment that unusually heavy rains may have resulted in a ground movement that affected the pipeline, which is part of its Athabasca network. Its shares were down 87 cents to $42.64.