A 12-year-old boy who was struck by a bullet while walking with his mother along a North York sidewalk near a shooting that injured three other people last weekend has died in hospital, police said Thursday.

Emergency crews were called to an apartment building in the area of Jane Street and Stong Court, just north of Finch Avenue West, around 2:20 p.m. after multiple calls about shots being fired in the area.

At least two occupants of one of the cars got out and ran at the occupants of the other, firing multiple rounds at them.

When officers arrived, they located a 12-year-old who was struck by a bullet while he was walking with his mother on the west side of Jane Street, Ramer said.

The boy was rushed to a trauma centre in critical condition. The mother was not injured.

He succumbed to his injuries on Wednesday afternoon.

Three other teens injured in the shooting were treated and released from hospital. 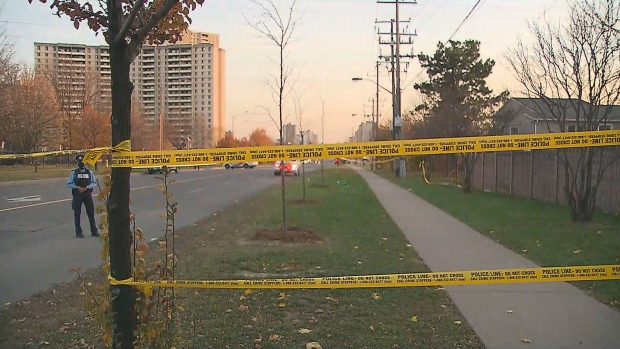 Investigators had earlier said the boy was just in the area to do some shopping with his mother.

On Monday evening, police arrested Rashawn Chambers, 24, of Toronto and Jahwayne Smart, 25, of no fixed address outside a downtown Canadian Tire in a takedown involving a phalanx of plainclothes detectives and their vehicles.

Three guns and at least two prohibited devices related to those guns were allegedly seized.

The accused were facing a combined total of 59 charges including attempted murder but on Thursday police confirmed that their charges will be upgrade to include one count of first-degree murder.

“This investigation has shown us that the two accused had planned to carry out a murder. The fact that the 12-year-old victim was not the intended target is not a piece of that. He was hit as these men were attempting to carry out their plan to murder someone,” Det. Keri Fernandes told reporters. 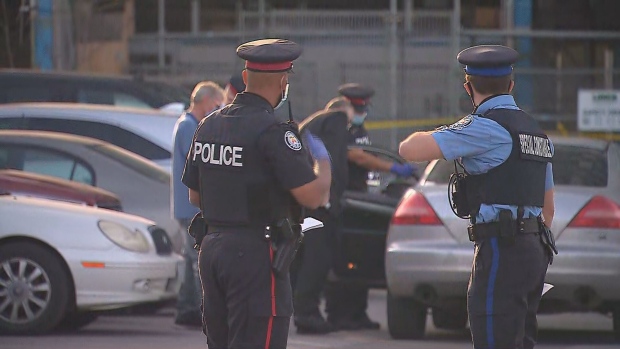 Fernandes said that there were a number of surveillance cameras set up along the route that the suspects took to the shooting scene, which helped investigators identify them.

However, she said that a third suspect who drove the suspects to the scene and participated in the planning of the homicide remains outstanding.

As for a motive, Fernandes said that investigators believe it is gang-related but can’t provide more specific details at this point.

“They had a plan to murder someone that day. That is as much as I can speak to about what their plan involved,” she said

The suspects previously taken into custody are also suspected of involvement in two other shooting incidents. One occurred three days before the quadruple shooting only a few minutes walk away from the scene, while the other occurred in the early hours of Nov. 7 in Brantford, Ont.

The identity of the 12-year-old victim is not being released at this time, in a keeping with a request made by his family.

“We can give the family very little from this, they have lost a son. The one thing they have asked for is privacy,” Fernandes said.