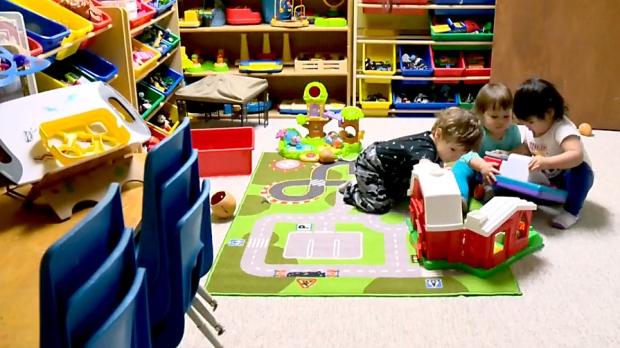 Two downtown city councillors are warning that tens of thousands of families in Toronto may not have access to childcare due to new provincial regulations that limit the size of groups within centres to 10 people.

University Rosedale Coun. Mike Layton and Spadina Fort York Coun. Joe Cressy have tabled a motion for next week’s city council meeting that asks the province to commit to “locating additional child care spaces” for families who aren’t able to return to their usual centres due to the new regulations.

The motion also calls on the province to ensure funding for all centres forced to operate at reduced capacity “so that they can remain viable.”

Speaking with CP24 on Thursday morning, Layton said that the new regulations effectively mean that most centres will only be able to operate at 30 or 40 per cent capacity and that means that lots of parents will be “out of luck.”

“If 60 to 70 per cent of spots can’t open than you are into the tens of thousands of families that aren’t going to be able to access childcare,” he warned. “For some that might not be a big problem if they can work from home and if they can juggle in their kids learning or even just entertaining their kids with their work schedules. But for many who need to go into work they are just not going to have that option and that means they are going to continue to have to rely on assistance from the federal and provincial governments in order to stay in their homes, pay their bills or feed their kids.”

Childcare centres were ordered to close for the better part of three months but earlier this month the province abruptly announced that they would be permitted to reopen so long as they abided by a series of guidelines, including a “cohorting” approach that limits the number of staff and children in each defined space to 10.

Since that announcement a number of centres have said that they need more time to open while others have suggested that they may not be able to open at all, given the new limits.

“Not everyone can take their child to work and not everyone can work from home,” Layton said. “In particular it (the lack of childcare) targets those in service positions and lower income jobs that need that service and unfortunately too many of them are going to be turned away because there is no plan from the province to actually ensure that we will have the same capacity or even close to the same capacity we had prior to COVID.”

In an interview with CP24 on Thursday morning, Cressy said that staff with the City of Toronto have estimated that 56,000 child care spaces in the city will be lost due to the new provincial guidelines.

He said that while it is important that the province ensures that child care is kept safe amid the COVID-19 pandemic, there needs to be a recognition that “there is no economic recovery without child care.”

“This is the problem. In Ontario we now have a plan to develop child care safely and that means fewer spaces in existing childcare centres. But there is no plan to replace all of the lost spaces,” he said.