Two men arrested in connection with fatal shooting in Brampton 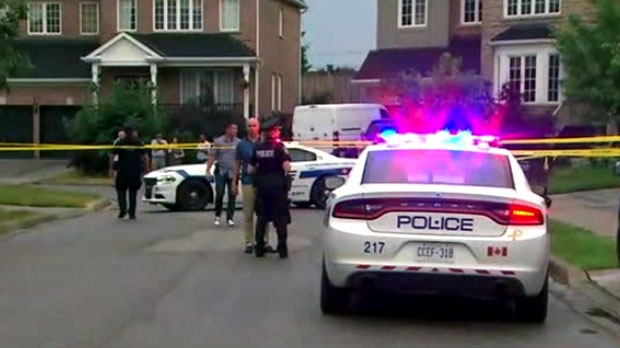 The scene of a deadly shooting in Brampton is seen.

Two men have been arrested in connection with a fatal shooting at a Brampton residence on Monday night but two other suspects remain outstanding.

Police were called to a residence on Donwoods Court, in a subdivision near Airport Road and Countryside Drive, at around 6:10 p.m. for a report of gunshots.

Once on scene police located a male victim – later identified by police as 27-year-old Palwinder Singh, of Brampton. He was pronounced dead on scene.

Residents tell CTV News Toronto that they noticed a vehicle pull into the area and park away from the house before two or three shots were heard.

“When they were (walking), there was something in one man’s hand. It was covered,” Kiren Dwep. “When they came back, nothing was in their hand.”

The sound of a male screaming broke through the quiet residential neighbourhood while the suspects fled toward the vehicle. Some neighbours were reportedly able to record the license plate of the car before it sped off.

“I heard a loud male voice screaming so I looked out, stepped out of the garage and that’s when I saw the guy run across the lawn, down the street and into his car,” one witness, who asked to remain anonymous, said.

According to neighbours, the home is divided into two units. It’s believed a group of men had started to rent the house several months ago.

“There were a couple of guys. They were partners – one guy had something to do with the trucking industry,” neighbour Amit Dhingra said.

“We’re concerned for this neighbourhood now.”

Sean Ponto, 18, and Andrew Edward, 19, both of Mississauga, have each been charged with one count of first-degree murder in connection with the shooting.

Police say that they continue to look for two other male suspects.

The first suspect is described as being in his early 20s, about five-foot-eight and 150 lbs. with short black curly hair, a black beard and a medium complexion. He was last seen wearing a light blue hoodie, blue jeans and white shoes.

The second suspect is described as black, clean-shaven and about five-foot-six and 160 lbs. He was last seen wearing a black hoodie, a black bandana and sunglasses.

Forensic officers returned to the neighbourhood Tuesday morning, combing through bushes on the property. A truck believed to belong to the victim remains surrounded by police tape.

Police say they still want to speak with witnesses or anyone in the area who may have surveillance or dash cam footage.