Two men paddle from southern BC to Juneau, Alaska 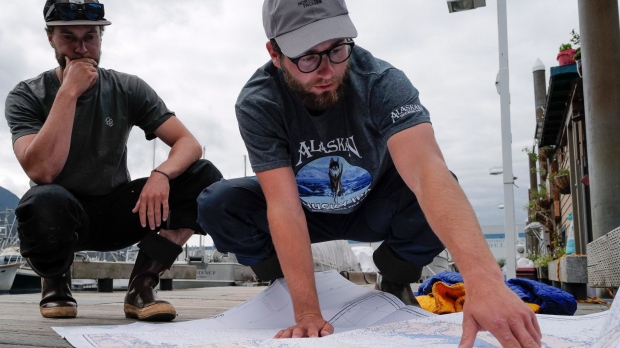 In this Thursday, Aug. 2, 2019 photo, Liam Godfrey-Jolicoeur, left, and Jake Dombek, talk at Harris Harbor in Juneau, Alaska, about their nearly two-month long trip up the Inside Passage by canoe. Both are originally from Vermont used the trip to raise money and bring awareness to environmental causes. (Michael Penn/Juneau Empire via AP)

JUNEAU, Alaska - The trip from Seattle to Juneau is about two hours and 15 minutes in the air. Flying from Vancouver would be a little quicker if there were direct flights. Let's guess it's about two hours even.

Paddling it in a canoe takes about 55 days.

Liam Godfrey and Jake Dombek, both 22, have been paddling steadily north to Juneau for the last two months, leaving southern British Columbia on June 7. Rowing more than 800 miles with all their gear, relying only on what they prepared, they've been working their way up the Inside Passage

“The timing was perfect and we just went all in,” Dombek said, who just graduated college. “We'd never planned a trip this big and did it.”

Rowing an average of 20 miles every day, Godfrey and Dombek spent hours a day working their way up the coast, stopping in small towns along the way where they'd mailed themselves food drops before they stepped off.

“There's pretty much no other place as beautiful that you could just paddle through,” said Godfrey.

Godfrey said he was living in BC last year when they had the idea for the trip. Both men started planning then, and spent the time working out the details, which could be difficult and time-consuming. This was made more difficult because they were frequently working, going to college, or both.

“The hardest part was maintaining our cohesiveness, getting our crap together,” Godfrey said.

The men worked with a number of companies, including Clipper Canoes, to source gear for their trip. They also put together a fundraising campaign so that they could raise and donate money to Pacific Wild, a non-profit foundation dedicated to protecting the Great Bear Rainforest on the Pacific Coast.

“That kind of became what this trip was about,” Godfrey said. “We wanted to raise awareness and give back to this beautiful area we were paddling through.”

The two donated their funds raised to date to Pacific Wild before leaving, said Dombek.

The trip itself has taken them up the coast, often running through tidal flats and by the odd glacier on the way north. Navigation was done by maps, with redundancy in the form of an independent GPS and their phones.

“We're both a fan of paper charts,” Godfrey laughed, as he traced the route north, showing where they'd camped.

The men said they picked a canoe for a few reasons; ease of loading, and higher gunwales for ocean chop. Their canoe, 18.5 feet long, carried more than 700 pounds, between their gear, supplies and themselves, Godfrey guessed.

“It's a lot easier to load, and you can fit more gear,” Dombek said. “We wouldn't have wanted to do it in any other boat.”

Camping was largely on whichever beach looked promising, or islands where they could find them, for security from bears and other wildlife. Carnivorous wildlife was a concern that they took precautions for every night, but nothing ever troubled them, the men said.

“You have to be aware of potentially dangerous animals,” Dombek said. “You just sleep a little better on an island”

The trip was free of any serious trouble, and good weather for the majority, Dombek said. Godfrey added that there were a few days of rough seas where they elected not to go out, and a few 5-8 mile ocean crossings to get across inlets that would take far too long to go down and out again.

Their biggest problem, perhaps, was running out of things to talk about as they paddled alone but for each other for two months.

“There were some days when it'd just be quiet,” Godfrey said. “We just had nothing else to say.”

From here, the boys will meet their fathers and make their way up to Glacier Bay and do some canoeing with them.

“We're excited to share with someone else,” Dombek said.

They don't have any other trips like this planned, though Godfrey added that they were both always thinking about other trips. Both men laughed and added that the next one probably won't be quite as long; 55 days is a long time to paddle.

“There's an aspect of seeing how what you can do: how far can you go?” Godfrey said.

In this Thursday, Aug. 2, 2019 photo Liam Godfrey-Jolicoeur, left, and Jake Dombek, talk at Harris Harbor, in Juneau, Alaska, about their nearly two-month long trip up the Inside Passage by canoe. Both are originally from Vermont used the trip to raise money and bring awareness to environmental causes. (Michael Penn/ Juneau Empire via AP)