Two people in critical condition after daylight shooting in Ajax

Two people are in hospital in critical condition after a shooting in Ajax Wednesday afternoon.

Durham police were called to the intersection of Kingston Road and Harwood Avenue sometime after 4 p.m.

Acting Sgt. George Tudos said occupants of two vehicles exchanged gunfire at the intersection. More than 40 rounds were fired during the shootout, he said.

When officers arrived, they located several shell casings and a white vehicle on the sidewalk riddled with bullet holes. Inside, they found two people, a man and a woman, suffering from gunshot wounds.

Tudos said the victims were transported to a Toronto trauma centre with life-threatening injuries. 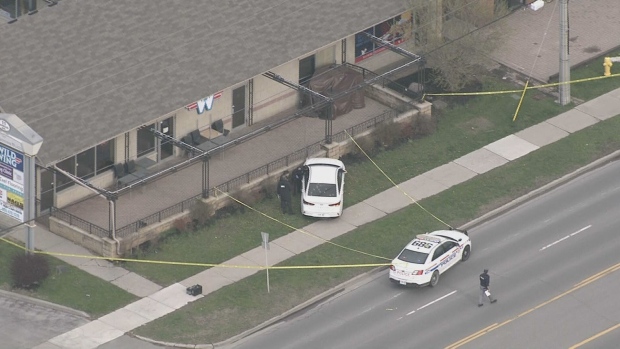 The suspect vehicle had left the scene. It is described as a four-door sedan, but police have no other descriptions at this time.

A third vehicle, not involved in the shooting, was also located with gunfire damage, Tudos said. The driver was unharmed.

"There's obviously some sort of altercation between the parties. That's something that we'll probably get into further upon our investigation. But we are looking into it. We have a lot of resources in play," Tudos said.

When gunfire erupted, employees at stores in the area ran and hid in their basements until police arrived, he said.

"I don't believe this is a random act. However, it's very surprising that no other people were injured with that many shots being fired," Tudos said.

"This is one of the busier intersections in Ajax, one of the main arteries off the highway as well, too. And the timeframe as well was when people are coming to work or some people even going to the evening shift. We're lucky that no one else was injured during this."

Tudos said the intersection will be closed for several hours as officers canvass the area for witnesses and videos.

"We are asking any witnesses, anyone that has any dashcam video as well to (anyone) that was in the area that they come forward and speak with our investigators."