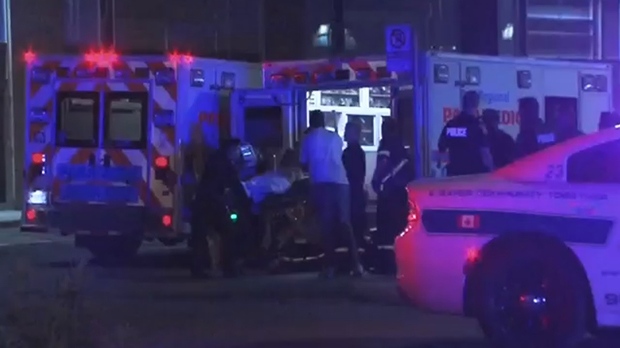 A victim of a shooting in the Queensway East and Stanfield Road area is loaded into an ambulance on July 14, 2019. (Peter Mills)

Two people were rushed to hospital after a shooting in the eastern part of Mississauga early on Sunday morning, Peel Regional Police say.

Officers said they were called to Queensway East and Stanfield Road at 2:54 a.m. for report of multiple shots fired.

They arrived to find two adults suffering from serious but non-life-threatening injuries in a parking lot.

Investigators say they are looking for two suspects who fled the scene in an older red Hyundai SUV.

A stretch of Queensway East was closed between Dixie and Stanfield roads until 7 a.m. to allow for an investigation.