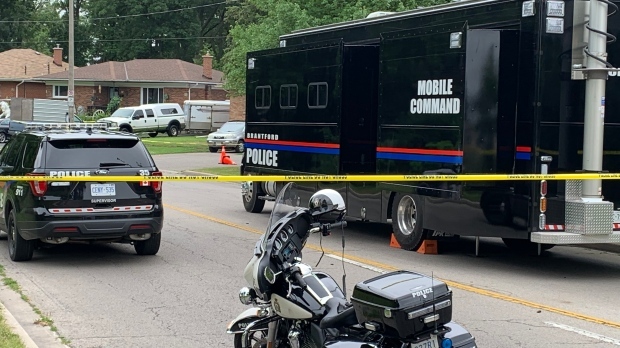 Two people are dead after a shooting in Brantford on Thursday morning. (Jeff Pickel/CTV Kitchener)

A 64-year-old man and a 62-year-old woman are dead after they were shot to death on a residential street in Brantford on Thursday morning, local police say.

Brantford police say they were called to 10 Park Road South in the east of the city at about 7:55 a.m. for a report of shots fired.

They arrived to find a male and female suffering from multiple gunshot wounds.

Paramedics attempted to treat both of them but they succumbed to their injuries at the scene.

Their names were not released pending notification of next of kin.

A vehicle involved in the incident was reportedly located two kilometres away on Rowanwood Avenue.

The area is closed off to the public as detectives conduct their investigation.