Two police officers were rushed to hospital via emergency run after they were attacked by a knife-wielding man while conducting a missing person investigation at a rooming house in Etobicoke on Tuesday morning.

Chief James Ramer says that Toronto police were contacted by their counterparts in Peel on Monday night after they located some blood in the missing person’s apartment, which is located near Royal York Road and Lawrence Avenue.

Ramer said that officers attended the address last night and then returned this morning to conduct a search of the premises. He said that the officers had spent about 90 minutes searching the home and speaking with tenants when a man came out of one of the rooms, produced a knife and “immediately attacked” them, without uttering a word.

In a news release, police said the man was wielding a butcher knife.

Ramer said that police were eventually able to restrain the man with the help of a conducted energy weapon. He sustained minor injuries during the course of the arrest and was also taken to hospital.

Ramer said that a sergeant sustained “two serious slash wounds” as a result of the attack while a junior officer sustained minor injuries.

Both were treated and released from hospital by late Tuesday afternoon.

“It is serious. The officer with minor injuries only has a year on the job. It affects everybody,” Ramer said of the incident. “It is a very significant event.” 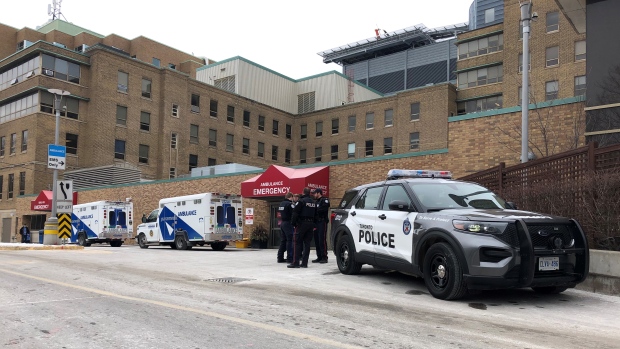 Ramer said that there are approximately six individual apartments inside the rooming house and that the officers were in a common area when they were attacked.

He said that police continue to investigate the missing persons report that first brought them to the building but aren’t sure whether it is connected to the attack on the officers yet.

“These things have a tendency of happening very quickly, which in this case it did, and luckily these officers were able to rely on their training and are fortunately OK,” Insp. Andy Singh told reporters during an update later on Tuesday afternoon.

Ahmed Al Farkh, 33, of Toronto, has been charged with two counts of attempted murder, four counts of assault with a weapon, two counts of aggravated assault of a police officer, weapons dangerous, and assault intent to resist arrest.

Officers were taken to Sunnybrook

The officers were transported to Sunnybrook Health Sciences Centre following the incident but one of them – the more junior officer – was released after just a few hours. The second officer was then released late Tuesday afternoon.

“I think this underscores the dangers of policing every day,” Jon Reid, who is the president of the Toronto Police Association, told reporters gathered outside the hospital earlier in the day. “These officers attended this address and were set upon by this male for no apparent reason,” he said.

Speaking with reporters during a news conference earlier on Tuesday, Premier Doug Ford said that he plans to call both officers when they are “up and at it again.” In the interim, he said that he is wishing them both a “speedy recovery.”

“It is down the street from our family home and you know it is concerning,” he said of the incident. “We have to protect our police at all costs. They put their lives on the line every single day. Imagine leaving your house every day, kissing your kids goodbye, your spouse goodbye and not knowing whether you are going to come back.”

The suspect is scheduled to make a court appearance on Wednesday morning.

A police cruiser is shown at the scene of an investigation near Royal York Road and Lawrence Avenue in Etobicoke on Tuesday. Two police officers were rushed to hospital via emergency run after some sort of altercation with an individual that was armed with a knife.