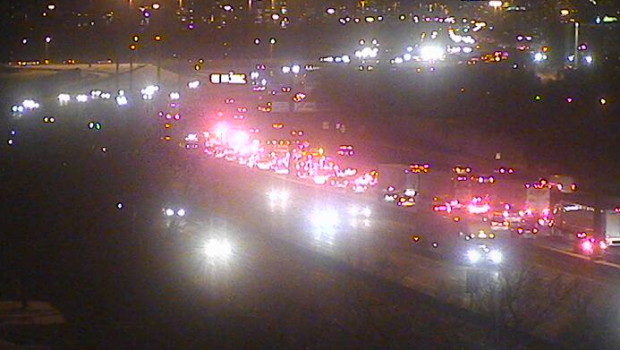 OPP are on the scene of a collision on the westbound express lanes of Highway 401 near Warden Avenue. (MTO)

Two young children, including one toddler, remain in hospital fighting for their lives today after a three-vehicle collision on Highway 401 in Scarborough on Friday night.

It happened in the westbound express lanes of the highway near Warden Avenue shortly after 10 p.m.

Ontario Provincial Police Sgt. Kerry Schmidt says that a vehicle was coming to a stop due to heavy traffic when it was rear-ended by another vehicle carrying a family of four. A small truck then slammed into the back of that middle vehicle, Schmidt said.

Following the crash, a three-year-old was taken to a trauma centre in life-threatening condition and a six-year-old was transported in critical condition. A female passenger in the vehicle was also hospitalized.

“It appears the collision was the result of either driver inattention or a driver not responding to changing traffic patterns ahead,” Schmidt said in a video message posted to Twitter on Saturday. “We talk about scanning and looking down the horizon to prepare for any changing traffic conditions or traffic patterns so you can slow down well in advance but unfortunately that does not appear to have happened in this case.”

Schmidt said that there was a “significant amount of intrusion and damage” as a result of the collision.

He said that while officers are continuing to investigate, there is no indication that alcohol or drugs were a factor at this time.

“It is just a scary situation when we have a collision like this that results in such serious injuries. It makes it so much more difficult when children are involved as well,” he said.