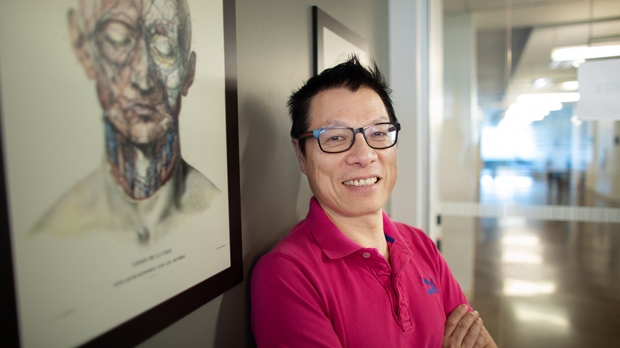 Kang Lee, shown in a handout photo, a professor and research chair in developmental neuroscience at University of Toronto, is developing a smartphone app that he says can monitor blood pressure by analysing a short selfie video. THE CANADIAN PRESS/HO-Johnny Guatto, U of T News

TORONTO -- You can learn a lot about someone from the videos they take of themselves. One day, these recordings may even be able to reveal your blood pressure, says a Toronto researcher.

Kang Lee, a professor and research chair in developmental neuroscience at University of Toronto, is developing a smartphone app that he says can monitor blood pressure by analyzing a short selfie video.

Digital sensors on a smartphone can detect the red light that's reflected by haemoglobin, a blood cell protein, under the skin. This allows the camera to capture miniscule changes in circulation that can be used to predict blood pressure through machine-learning algorithms, Lee explains.

Lee and his University of Toronto colleagues teamed up with Chinese researchers at Hangzhou Normal University and Zhejiang Normal University to study the software. Their findings were published Tuesday in the American Heart Association journal Circulation: Cardiovascular Imaging.

Researchers asked 1,328 participants in Canada and China to take two-minute videos of their faces on an iPhone using the app. These results were compared to readings on a traditional cuff-based blood pressure monitor.

The study suggests these smartphone-captured blood pressure measurements were approximately 95 per cent accurate.

While the proof of concept looks promising, Lee noted there are a few important caveats to the findings.

He said researchers only collected data on adults whose blood pressure was within the range of normal, and further research is needed to see if the app works for people with hypertension, or high blood pressure.

Another limitation was that more than 90 per cent of participants were of East Asian descent, and Lee said the software's prediction model may not reflect variations in cardiovascular activity across ethnicities.

Lee said his team is looking for potential collaborators around the world in order to recruit a more diverse group of participants for future studies.

“We need to expand our sample so we don't have a racist app that only can measure certain groups of people's blood pressure,” Lee said.

However, Lee noted that the model aims to account for racial differences by not including measurements of the pigment melanin, which determines skin tone.

While it may be a while before the technology reaches consumers, Lee said it could have widespread health benefits.

Nearly one-quarter of Canadians have hypertension, and 15 per cent of them are unaware of their condition, according to numbers released by Statistics Canada earlier this year.

Hypertension is one of the leading risk factors for cardiovascular disease, and its prevalence increases with age, said Lee.

“The sooner you find about your blood pressure the better,” said Lee. “In 30 seconds, you can learn a lot about your health.”