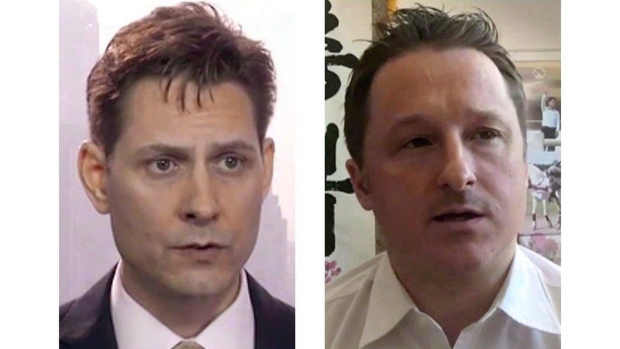 Michael Kovrig (left) and Michael Spavor, the two Canadians detained in China, are shown in these 2018 images taken from video. THE CANADIAN PRESS/AP

OTTAWA - U.S. lawmakers in the House of Representatives are being asked to condemn the “abusive” imprisonment of two Canadian men in China.

China imprisoned former Canadian diplomat Michael Kovrig and entrepreneur Michael Spavor in December, little more than a week after the RCMP's arrest of Huawei executive Meng Wanzhou in Vancouver on an American warrant.

The U.S. wants to extradite Meng and prosecute her for allegedly lying to banks to avoid U.S. sanctions on Iran.

The motion introduced in the lower house of the U.S. Congress praises Canada for upholding the rule of law in arresting Meng.

The motion also calls for the immediate release of Kovrig and Spavor and for “due process” in the case of a third Canadian, Robert Schellenberg, who had a previous prison sentence for drug smuggling upgraded to death earlier this year.

The motion will be sent to the House Committee on Foreign Affairs before the full House votes on it later.

In May, the U.S. Senate tabled a similar resolution in support of Kovrig and Spavor that won rare unanimous approval.

The House resolution says Kovrig and Spavor “have faced harsh conditions while in detention that include limited consular access, no access to a lawyer, being unable to turn off the lights at night, and lengthy interrogations, including in the case of Mr. Kovrig, about his official activities during his previous tenure as an accredited diplomat in the People's Republic of China.”

That treatment amounts to a potential violation of the Vienna Convention on Diplomatic Relations, the motion says.

The incident has plunged Canada's relations with China to an all-time low, with China blocking agricultural shipments such as Canadian canola seeds, alleging they found pests in some shipments.

China has also asked Canada to suspend all its meat-export certificates after Chinese customs inspectors detected residue from a restricted feed additive, called ractopamine, in some pork products certified as Canadian-inspected. Canada has questioned whether the meat even came from Canada.

The motion says the Chinese Ministry of Foreign Affairs “strongly urged Canada 'to immediately release' Meng Wanzhou and threatened that otherwise 'it will definitely have grave consequences, and (Canada) will have to bear the full responsibility for it.' ”

The motion refers to a U.S. State Department assessment that says Chinese judges “regularly received political guidance on pending cases, including instructions on how to rule, from both the government and the CCP (Chinese Communist Party), particularly in politically sensitive cases.”

Canada has been courting international support for Kovrig and Spavor, an effort that has raised the ire of Chinese leaders.

“We would also like to express our appreciation to all those who have spoken in support of these detained Canadians and the rule of law to date. This includes Australia, Denmark, Estonia, France, Germany, Latvia, Lithuania, the Netherlands, Spain, the United Kingdom, the United States, the EU, the G7 and NATO.”