‘Unacceptable’: Tory speaks out against rise in anti-Semitic incidents 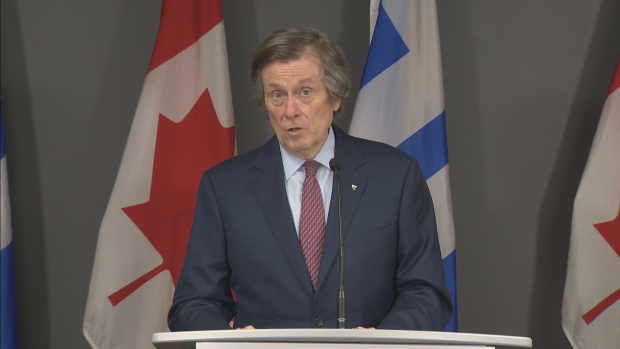 Toronto Mayor John Tory is speaking out against a rise in anti-Semitism in the city in the wake of increased reports of incidents targeting Jews.

“I want to be very clear that anti-Semitic acts are absolutely unacceptable and will not be tolerated in our city,” Tory said in a statement Wednesday. “I have heard the valid concerns of the Jewish community and I stand with them against this hatred.”

There have been multiple reports about harassment targeting Jews in the city recently, including a Jewish store owner in Kensington Market who recently had his business vandalized with anti-Semitic graffiti referencing the Holocaust.

According to a recent report by UJA Federation of Greater Toronto, there have been more than 50 anti-Semitic incidents reported around the GTA in May – a fivefold increase compared to the previous few months.

The incidents, according to the report, included mock eviction notices being placed on Jewish homes in The Annex and Jewish families being harassed and called “baby killers.”

Asked about reports of a rise in anti-Semitic incidents in the city, Toronto police told CP24.com in a recent email that “in response to recent global events, high visibility uniform patrols are being conducted across the city to provide reassurance to all community members that may feel vulnerable to crimes motivated by hate or bias.”

The statement added that Chief Ramer “has been clear that the Toronto Police Service will investigate every alleged hate crime and lay charges when warranted.”

Incidents coincided with uptick in fighting between Israel, Hamas

The uptick in incidents targeting Jews coincided with fierce fighting that broke out between the Israeli military and Hamas, which rules the Gaza strip.

The fighting escalated on May 10 when Hamas launched a barrage of rockets at Jerusalem following weeks of clashes in the city over the possible eviction of several Palestinian families from their East Jerusalem homes.

Hamas fired over 4,000 rockets toward Israeli cities during the fighting, while Israeli warplanes struck around 1,000 targets in Gaza.

More than 250 people were killed in the fighting, the vast majority of them Palestinians living in Gaza, which also saw much of its critical infrastructure damaged.

While Israel’s Iron Dome defence system intercepted most of the Hamas rockets, some got through, killing 12 Israelis.

The fighting sparked large protests around the GTA and some of them saw clashes between pro-Israeli and pro-Palestinian supporters.

The UJA report emphasized that while criticism of Israel is not necessarily anti-Semitic, it often veers into anti-Semitism.

“There is a clear correlation between anti-Israel activism and antisemitism in Canada. Though criticism of a particular Israeli government policy or decision is not necessarily antisemitic, we have seen time and time again that anti-Israel agitation can lead to attacks on Jewish community members verbally, physically, and online,” the report stated.

CNN recently broke ties with a freelancer who declared during the fighting that “the world today needs a Hitler.”

Many of the local incidents targeted homes, synagogues and individuals because they were identifiably Jewish.

“We will not let hatred take root in our city and we will not let it grow,” Tory said in his statement. “This is why our Toronto For All public education initiative this year will target anti-Semitism and why we have worked to put in place policies to stop hate rallies in our city.”

A 2020 report by Toronto police found that while Jews make up just 3.8 per cent of the city’s population, they were targeted in approximately 30 per cent of all hate crimes in the city last year, the highest proportion of any one group.

Tory said the local rise in anti-Semitism also comes amid “a deeply concerning global increase in polarized discourse that includes a disturbing rise in racist and discriminatory behaviour.”

He said that includes but is not limited to Islamophobia, anti-Asian, and anti-Black racism, and hatred directed at Indigenous and 2SLGBTQ+ communities.

“As Mayor of Toronto, I am the Mayor of all of the wonderfully diverse communities who call our city home. That is why I have met with and will continue to meet with members of the Black community to address their concerns about anti-Black racism,” Tory said. “In the coming days, I also plan to meet with members of the Muslim and Asian communities to hear their concerns about incidents of Islamophobia and Anti-Asian racism in our city.”