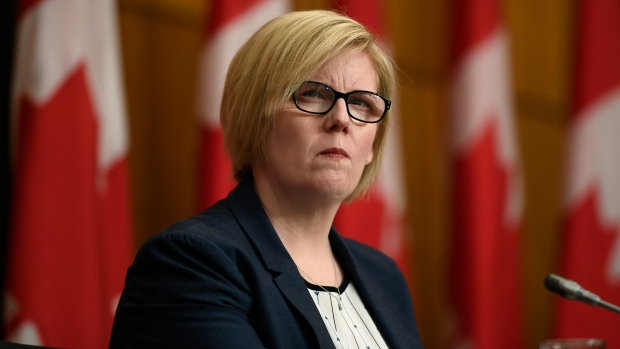 Minister of Employment, Workforce Development and Disability Inclusion Carla Qualtrough listens during a news conference on the state of emergency in British Columbia, in Ottawa, on Sunday, Nov. 21, 2021. THE CANADIAN PRESS/Justin Tang

OTTAWA - The federal minister in charge of aid to the unemployed says jobless Canadians who refuse to get vaccinated may find themselves blocked from benefits so long as public health concerns remain top of mind.

The Liberals have tacked conditions onto a suite of benefit payments, saying none can go to workers who lose work or hours because they have refused to get vaccinated.

The rules don't apply to those who have a medical exemption.

Employment Minister Carla Qualtrough says the decision was part economic to make sure workplaces weren't shut down because of an outbreak, and also to encourage more eligible Canadians to get a shot.

In an interview with The Canadian Press, Qualtrough says the rules are likely to stay in place so long as public health remains a top policy priority.

The government's latest round of benefits for hard-hit workers is scheduled to last until early May, though the Liberals have the power to extend aid until the summer if necessary.

“As long as the collective public health of Canadians is jeopardized, and our economy is thereby threatened, we're going to have to keep public health policy top of mind in our employment and labor and economic decision making,” Qualtrough said.

“And I don't know how long that will be.”

Qualtrough started as employment minister shortly after the October 2019 federal election, coming into the file at a time when the country had a historically low unemployment rate.

The pandemic changed everything starting in March and April 2020 when the first wave shut down much of the economy. Three million jobs were lost over those two months, while almost as many had their hours cut.

By May, the unemployment rate hit a historic high of 13.7 per cent as the government shut down the employment insurance system in favour of pandemic benefits like the Canada Emergency Response Benefit and its successor, the Canada Recovery Benefit.

Federal aid was revamped again in December. It's now more targeted at the hardest-hit sectors, and includes a $300-a-week benefit for workers who are subject to a lockdown.

The legislation that created the benefit says a lockdown is when a public health authority has ordered non-essential businesses closed and non-essential workers to stay home. The wording of the law, however, allows cabinet to decide what region is in lockdown to qualify for the aid.

Qualtrough said the latest pivot in pandemic aid was conceived in the fall when the Liberals looked to create an insurance policy against whatever twist the pandemic threw next at the country.

“We knew we had to make sure that if something like Omicron happened, that we still needed a tool to help Canadians who either would lose their jobs or would face reduced hours,” she said.

“But we knew the economy in September of 2021 looked very different than it did in September of 2020. So we couldn't just continue with broad measures that maybe would disincentivize work, or wouldn't encourage maximum labor force participation.”

Last month, the unemployment rate hit six per cent, or 0.3 percentage points above the level recorded just before the pandemic in February 2020. And the share of working-age Canadians with a job hit its highest point ever.

Looking back to the start of the pandemic, Qualtrough said the government wanted to target spending at jobless workers rather than provide income-support to everyone in the country, some of whom, like seniors, were still getting their usual benefits despite the downturn.

As the employment minister overseeing the best and worst labour markets, Qualtrough says she has been frustrated by the limits in the government's toolkit to help hard-hit workers.

She pointed to outdated systems that need upgrading as one example, and rules in the system that meant some people weren't covered by all the moves the government made.

“There were people who did not benefit in the way that they would have had we gone down the ... wide, but less deep model of helping everybody,” she said.

“I don't think I would change it. I think we made the best decision for the people who were the most impacted, certainly at the time.”

This report by The Canadian Press was first published Dec. 30, 2021.