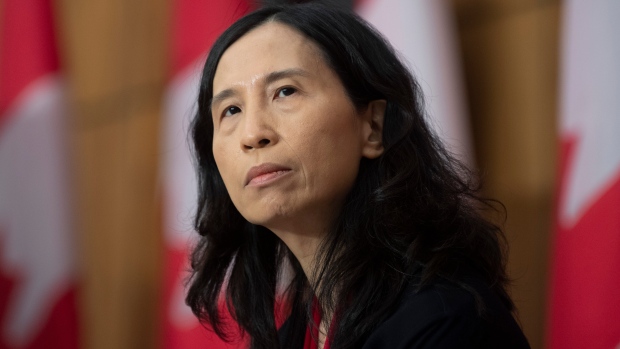 OTTAWA - Canada's chief public health officer says the priority list of people who will get vaccinated first against COVID-19 has to be refined because the initial six million doses set to arrive in the first batch will not be enough to cover them all.

Health Canada is in the final stages of reviewing the COVID-19 vaccines from Pfizer and Moderna. The regulator anticipates decisions on approving both before the end of December.

Vaccines from AstraZeneca and Johnson & Johnson are also being studied, with no suggestion yet of when those reviews might be done. Canada has contracts for three more vaccines in late-stage clinical trials but has not starting rolling reviews on any of them yet.

Dr. Theresa Tam said the variety of vaccines on Canada's docket and the expectation that several will eventually be approved “means we will have more flexibility as time goes on, and more and more vaccines come on board.”

“We're expecting that in the second quarter, depending on the approvals of the vaccines, we will have different amounts, but that is when the supply will become more and more plentiful,” she said Wednesday in a virtual speech at the 2020 Canadian Immunization Conference.

Most vaccine makers are just starting to ramp up production now. Initial production lots are much smaller, and are in high demand everywhere in the world.

At the moment, Canada is on track to get four million doses from Pfizer and two million from Moderna between January and March. With both vaccines needing two doses to be effective, that's only enough to vaccinate three million people.

“So we have to do further refinements to these priority groups in order to know exactly how we're going to sequence the delivery of the vaccines,” Tam said.

NDP Leader Jagmeet Singh said having to pare down the list is a massive Liberal government failure.

“There is no clear plan who is going to receive the vaccine,” he said Wednesday.

“The government has not provided these details.”

The National Advisory Committee on Immunization issued a preliminary priority list for the COVID-19 vaccine last month, with four subsets of people based on risk of serious illness or death, and risk of exposure or outbreaks.

The list included older Canadians, those with pre-existing conditions like liver and heart disease or diabetes, and people who live in the same household as those people. Long-term care workers, people who live in Indigenous communities, and front-line essential workers such as first responders or grocery store employees are also included.

But that list of people is far longer than three million. There are nearly seven million Canadians over the age of 65 alone.

Provincial governments will ultimately decide their own priorities but the national list is intended to guide those decisions.

Long-term care homes are widely expected to be the highest priority for both workers and residents. In the first wave of the novel coronavirus pandemic in Canada, more than eight in 10 people who died from COVID-19 were associated with long-term care.

The tragedy has continued in the second wave, with outbreaks in hundreds of facilities countrywide, and more residents dying every day. Ontario reported 35 deaths from COVID-19 Wednesday and 22 of them were residents in long-term care.

More than 400,000 Canadians live in a long-term care setting or a retirement residence, according to the 2016 Census by Statistics Canada.

Approving the vaccines is only the first step in what Tam called one of “the most complex operations ever taken in public health.” Getting it to provinces to administer and convincing Canadians to take it could prove to be even more difficult.

Tam appealed to the medical experts in the audience to help combat growing rhetoric that COVID-19 vaccines aren't safe.

From a petition sponsored by Conservative MP Derek Sloan that warns these vaccines are “effectively human experimentation,” to a van driving around Ottawa with a digital display claiming the vaccine “will destroy your DNA” there is evidence of some campaigns to convince Canadians not to get the COVID-19 vaccine when it comes.

Tam said disinformation campaigns are not new but “because of the social media and its internet age, we've got even more of a challenge on our hands than anyone else in tackling pandemics of the past.”

“So it is a significant aspect of the response that we have to deal with,” she said.

She said the Public Health Agency of Canada is developing a series of webinars about the vaccines, how the regulatory and approval process works, and how the different types of vaccines work, so medical professionals can become influencers in their communities.