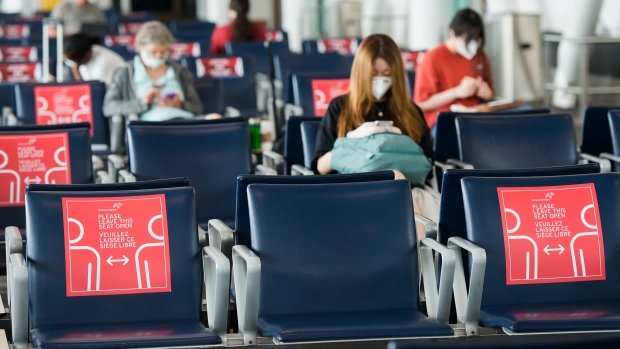 People wearing mandatory masks wait at their gate using physical distancing at Toronto's Pearson International Airport for a "Healthy Airport" during the COVID-19 pandemic in Toronto on Tuesday, June 23, 2020. THE CANADIAN PRESS/Nathan Denette

Eighty-six per cent of respondents agree with stricter measures that suspend flights to most sun destinations and require quarantining at a hotel at the passenger's expense upon arrival in Canada, according to an online survey by Leger and the Association for Canadian Studies.

The poll also found that 87 per cent of respondents think the government should go further by banning international travel until there are several consecutive days of reduced COVID-19 numbers.

The wariness of foreign trips stems in part from more transmissible - and possibly more lethal - variants of the virus emerging abroad as well as homegrown politicians jetting off to far-flung beaches during the holidays, says Leger executive vice-president Christian Bourque.

“We probably would not have gotten such high numbers before the whole talk about the South African variant, the Brazil variant,” Bourque said in an interview. “I think this probably jolted Canadians in a way.

“And then when you see people coming back with a very nice tan, you're thinking, 'Why am I making the effort and you're not?' And in certain cases it was MLAs and even (provincial) cabinet ministers,” senators and MPs, he noted.

Prime Minister Justin Trudeau announced last Friday that Canadian airlines have suspended flights to Mexico and the Caribbean until April 30 and that returning passengers will soon have to self-isolate at a federal facility for up to three days after taking a PCR test at the airport.

The reaction differed depending on geography, with 91 per cent of respondents from Quebec and Atlantic Canada in favour of the new restrictions but just three out of four Albertans backing the clampdown, the poll found.

The possibility of even stricter rules such as an outright ban on international travel raises questions around the flow of essential goods, many of which enter the country in the bellies of passenger planes, and around freedom of movement as guaranteed in the Canadian Constitution.

Section 6 of the Charter of Rights and Freedoms states that “every citizen of Canada has the right to enter, remain in and leave Canada,” though all rights are subject to reasonable limits.

The urge for tougher travel rules comes as Canadians find their mental health on the wane, with just 29 per cent of survey respondents rating it as very good or excellent, the lowest since the pandemic began.

“We're getting into the doldrums of February, and things are not improving. If you look from November to today, it's a steady decline in self-perception of the state of your mental health,” Bourque said.

Conducted Jan. 29 to 31, the online poll surveyed 1,559 Canadians. It cannot be assigned a margin of error because internet-based polls are not considered random samples.