‘We are doing everything we can to get live music venues open again’: Tory 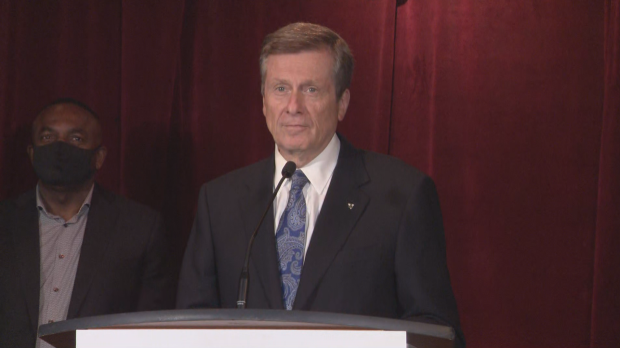 Mayor John Tory announced on Thursday that the city is investing a total of $1.7 million in property tax relief to 45 live music venues this year.

Toronto Mayor John Tory says the city is working on a plan to reopen live music venues safely amid the COVID-19 pandemic.

Tory made the comment during a press conference at The Cameron House on Thursday afternoon and said the city is working on finding rules and protocols to get live music venues up and running again.

Tory noted that reopening these venues does come with some challenges as it will be difficult to follow current health and safety guidelines.

“This is a complicated matter because… people sit close together and enjoy each other’s company and enjoy some music and maybe a liquid refreshment or two,” he said. “And those are the kinds of places... that are challenging in the context of trying to find a way to do that that’s viable but also a way that respects the health challenge that we have.”

Many music venues, along with other businesses across the city, have shut down since mid-March due to the pandemic.

As of July 31, Toronto entered Stage 3 of the province’s reopening framework which allows for indoor gatherings with up to 50 people and 100 people for outdoor gatherings.

But, the number of people permitted inside an indoor setting has to be limited so that every person can maintain a physical distance of at least two metres from others outside of their social circle, a difficult rule to implement in many of Toronto’s small music venues.

The provincial government also said dancing at restaurants and bars, other than by performers hired by the establishment, is currently not allowed as it is considered a high-risk activity.

With many live music venues already struggling to stay afloat before the pandemic hit, Tory said urgent action was needed to help these businesses survive.

That is why the city will be investing a combined total of $1.7 million in property tax relief this year to 45 live music venues.

Deputy Mayor Michael Thompson also attended the announcement and said the funding will help keep music venues alive which contribute to the vibrancy of Toronto neighbourhoods.

“Obviously, maintaining live music venues is critical to Toronto’s cultural vitality, to the city’s ability to attract talent and investment and to our effort to sustain a vibrant and livable city,” he said.

Venues that will receive the financial relief include Burdock, The Cameron House, The Garrison, Horseshoe Tavern, Lula Lounge, The Painted Lady, The Phoenix Concert Theatre and Relish Bar & Grill.

Ward 10 Spadina-Fort York councillor Joe Cressy was also at the announcement and said the relief measure is intended to be a permanent initiative.

“The fact is in booming cities, economic factors like rising property values have priced out far too many venues and musicians,” Cressy said. “And so it’s for that reason that this new live music tax subclass, a permanent initiative, is about more than simply supporting live music during COVID, it’s here to serve and support live music venues to thrive after this pandemic is over as well.”

According to a city press relief, this year’s funding will be implemented through the final supplementary property tax notices that will be issued in the fall.