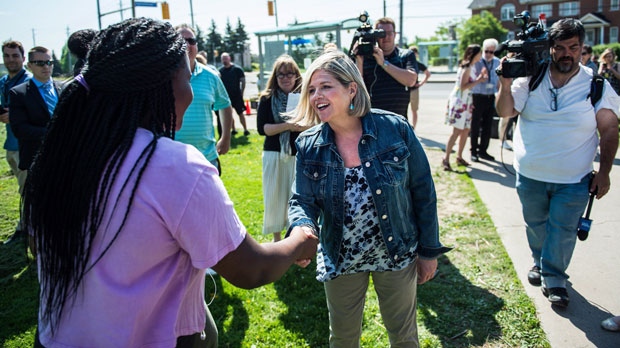 Ontario NDP leader Andrea Horwath meets students after an announcement to media regarding her plan to support School infrasturcture outside Sir Oliver Mowat Collegiate Institute in Toronto on Friday, May 25, 2018. (THE CANADIAN PRESS/Aaron Vincent Elkaim)

According to the most recent census, there are over 3.5 million Ontario residents – and potential voters --between the ages of 18 and 25.

This age group, once called apathetic, is now a driving force in politics. As seen in the 2015 federal elections, where 57.1 per cent of youth showed up to the polls, young people can make or break a campaign. This surge in political participation was an 18.3 percentage point increase from the 2011 federal elections.

Even many of the politicians who do pay attention to young people, focus on one issue – lower tuition. Nour Alideeb, chairperson of the Canadian Federation of Students (CFS) – Ontario, says it is important for candidates and party leaders to understand that students are not one-dimensional.

“We are workers, caretakers, students, spouses, parents and the like,” she said. “We are not apathetic. We care deeply because at the end of the day these public services impact our everyday lives.”

Candidates have a history of focusing their campaign stops on retirement centres, public parks, and places of employment. Youths are largely targeted through social media alone. This year’s campaign isn’t far off.

The NDP’s #AskAndrea Twitter session, the Liberal’s announcement livestreaming, and the PC’s use of Youtube are direct attempts to try to increase campaign reach. Abdullah Mushtaq, director of advocacy for the College Student Alliance (CSA), encourages this kind of engagement, as long as candidates really listen to the views presented on those platforms.

“Canadian youth showed up and drastically impacted the outcome across the country,” he said. “Ontario’s party leaders should know our youth and mature students are just as ready as anyone to have their voices heard.”

CTV News Toronto breaks down the five most important issues to youth and millennials leading up to June 7.

Increasing the minimum wage “is crucial”

With the increase in part-time and contract jobs, the issue of minimum wage is of primary concern to youth. According to Alideeb, students and families have to balance multiple part-time, minimum wage jobs to afford post-secondary education and basic necessities.

“The system was set up for students to fail,” she said. “It was set up in a way that makes students dependent on mortgage-sized loans.”

She said that all parties need to commit to increasing the minimum wage to $15 as well as eliminate the student sub-minimum wage “because it is discriminatory to pay students less than the minimum wage simply because of their age.”

The Ontario Liberal Party has already enacted legislation to raise the minimum wage to $15 by January 2019, something the Ontario New Democrats have been staunch supporters of since 2016.

Student minimum wage applies to people under the age of 18 who work 28 hours a week or less when school is in session, or work during a school break. The wage is currently $13.15 per hour and will increase to $14.10 per hour in 2019.

The NDP has pledged to eliminate student minimum wage and server wage, meaning that all workers will be paid the same for entry-level minimum wage positions.

Progressive Conservative leader Doug Ford has said he will freeze the wage increase at $14. This decision was made after businesses expressed concerns about having to cut jobs.  Instead, he says the PC party will eliminate taxes for full and part-time workers making minimum wage.

The CSA said they would be interested to see what ideas the PC party has around how to financially support students if they decide to freeze the minimum wage at $14 an hour.

“This would mean less money in the pockets of students working part-time to support their education,” Mushtaq said.

Housing in Toronto a struggle for students

The Greater Toronto Area is going through a housing crisis, with the cost of renting, particularly near a university campus, becoming more expensive every year.

Both Mushtaq and Alideeb said that housing is one of the major issues facing Ontario college and university students. Not only is housing itself unaffordable for most, but there are a number of risks for young people living on their own.

Wynne has said she will create the Cooperative Housing Development fund to support the building of co-op housing and will work with developers and municipalities to “enable small-scale residential intensification” and allow the building of multi-unit projects.

Horwath has promised to build 65,000 affordable housing units and 30,000 supportive housing units over the next decade. She will also create a “rent registry” so that new tenants are aware of how much a landlord has charged in the past.

Both the Liberals and NDP have promised to limit rent increases to fund repairs or renovations.

The PC platform simply says it will increase the supply of affordable housing across the GTA. No other details have been provided at this time.

No tuition freezes in 2018 platforms

No political party has promised to freeze tuition, but the NDP and Liberal leaders have both addressed the issue of post-secondary education financing in their platforms.

Wynne has promised to reduce the minimum parental contribution required for a student to receive a loan or grant through the Ontario Student Assistance Program (OSAP). Her platform says this will create “thousands of dollars” more in aid.

Horwath has promised to end student loans, instead opting for grants. Her platform promises that “every student whose family is eligible for the Ontario Student Assistance Plan will graduate free of any debt to the province.”

The party has also promised to retroactively forgive the interest on loans already acquired by graduates and to no longer hire private debt collection services.

Most of the PC party’s education platform relates to primary education. The only promise Ford has made in relation to post-secondary education is to mandate universities to “uphold free speech on campuses and in classrooms.”

Ford has yet to release any platform details regarding financial support for students.

“For students to feel like they can continue in post-secondary education, or graduate and start their careers, there needs to be a plan to address the rates that tuition increase and the amounts of debt that students take on,” said Alideeb. “The best way a political party can address this is by reducing the upfront costs to access education and by eliminating extra costs that students take on in order to access post-secondary education.”

Health care plan for students has to be “comprehensive”

Every party has made a number of announcements dealing with health care. The focus has mostly been on ending “hallway health care” at Ontario’s hospitals, but each leader has also acknowledged the importance of mental health -- an issue that is affecting younger people more and more.

According to the Ministry of Children and Youth Services, about one in five children and youth in Ontario have a mental health challenge.

“It is no secret that the stress of being able to afford food, housing, tuition and the like are impacting students’ mental well-being,” Alideeb said. “Students need a comprehensive overview of on- and off-campus mental health supports that are diverse considering that different student have diverse approaches to well-being.”

The NDP has pledged to create a dedicated Ministry of Mental Health and Addictions to help coordinate services and hire 22,000 new mental health workers. The Liberals have pledged to reduce wait times for mental health and addiction care, as well as provide free access to psychotherapy for up to 350,000 more people suffering from anxiety and depression.

Both the Liberals and NDP have promised to hire enough support workers for every high school in Ontario.

The PC party has promised $1.9 billion for “mental health, addictions and housing supports” over the next decade, focusing on cutting wait times for youth who need treatment. They will also introduce free dental care for low-income seniors.

“Having on-campus supports available for students while preparing them to join a changing global workforce is a key priority CSA would like to see addressed during the election,” Mushtaq said.

The NDP has said they will provide universal coverage of 125 drugs for people of all ages and provide coverage for dental care.

For many young people, the issue of transit has become a significant headache. It is not a topic widely discussed by provincial leaders and is often thought of as a municipal concern.

According to Alideeb, public transportation should be considered a joint initiative with the province.

“Students across the province are struggling with inaccessible and unaffordable transit,” she said. “This is because there is often a "pass the buck" mentality between jurisdictions (municipal, provincial and federal) that operate and maintain transit systems.”

Ford has said he will support regional transit projects, including an expansion to Bowmanville and Kitchener. If elected, the PC party has also pledged to upload responsibility for subway infrastructure from the City of Toronto.

The city would be responsible for day-to-day operations and would be able to keep the revenue generated from the Toronto Transit Commission.

The NDP has promised to cover 50 per cent of operating costs for municipal transit, provide two-way all-day GO rail service between Kitchener, Waterloo and Toronto, and has committed to building Toronto’s downtown relief line.

Horwath has also pledged to update Ontario’s Cycling Strategy. “We will require cities and municipalities to develop active transportation plans by 2021 that meet the needs and realities of their communities,” her platform reads.

Dreaming of a better future

Neither the CFS nor the CSA are supporting a political party, as they are non-partisan organizations, but vocalized what would encompass their ideal political platforms.

“We believe college and university education must be high-quality and available to all who wish to attend; the perfect platform would make this a reality for all Ontarians,” Mushtaq said.

For Alideeb, the best political platform would be one that doesn’t underestimate young people.

“My dream plan is one that understands the importance of public funding for public goods and services,” Alideeb said. “Student issues are all intertwined and like dominos, high tuition fees impact mental health, housing, workers’ rights, and so on.”

“The solutions are there but decision-makers and politicians have to prioritize these issues and want to make a change.”

Progressive Conservative Leader Doug Ford speaks at a rally at a school in Barrie, Ont., on Friday, May 11, 2018. Ford pledged to repeal the province's sex-ed curriculum. (THE CANADIAN PRESS/Colin Perkel)

Ontario Liberal Party Leader Kathleen Wynne meets a young student before a roundtable discussion on education at the University of Waterloo during a campaign stop on Friday, June 1, 2018. THE CANADIAN PRESS/Andrew Ryan