'We have a lot of options now,' Brampton man says after winning $70M Lotto Max jackpot 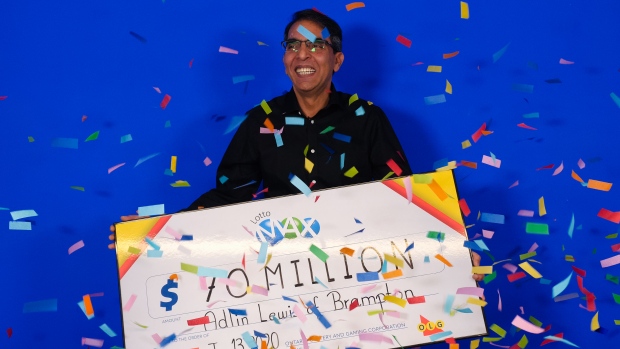 Adlin Lewis is seen in this photo collecting his $70 million cheque on Jan. 13, 2020. (PHOTO: Ontario Lottery and Gaming Corporation)

The winner of the largest lottery jackpot in Canadian history has now collected his $70 million cheque.

Adlin Lewis, a 49-year-old credit risk manager from Brampton, stopped by the Ontario Lottery and Gaming Corporation (OLG) prize centre in Toronto on Monday to pick up his Lotto Max winnings.

Lewis said he was warming up his car for work when he checked the app and learned he had won the big prize. Rather than taking the day off, Lewis said he went into work and tried to figure out the best way to share the news with his wife.

“I wanted to tell her in a special way – with a trip or something creative – but I couldn’t keep this news to myself, so I ended up waking her up in the wee hours of the morning on Thursday and just telling her outright,” he said in a press release sent out by OLG.

Lewis said this is not the first time luck has been on his side.

“A couple of years ago I won a car, and then more recently, I won both the first and second prizes in a workplace holiday draw. When my colleagues found out that the winning $70 million LOTTO MAX ticket was sold in Brampton, they were joking at the office ‘Is Adlin here? Did Adlin call in sick today?’” he said.

Lewis said he plans to use his winnings to make investments, take trips and just generally enjoy life.

"We have a lot of options now," he said.