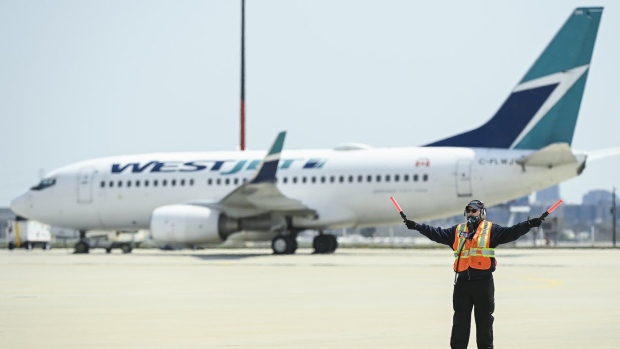 Airline groundcrew work as a grounded Westjest plane sits on the tarmac at Pearson International Airport during the during the COVID-19 pandemic in Toronto on Tuesday, April 27, 2021. The chief executive of WestJet Airlines Ltd. says it is flying 32 per cent fewer flights in and out of Toronto Pearson International Airport in July than it did in 2019. THE CANADIAN PRESS/Nathan Denette

CALGARY - As the Canadian travel industry continues to struggle with an unprecedented rebound in demand, WestJet Airlines Ltd. is flying 32 per cent fewer flights in and out of Toronto Pearson International Airport in July than it did pre-pandemic.

CEO Alexis von Hoensbroech said the Calgary-based WestJet made a series of proactive schedule reductions between March and May in anticipation of the logistical problems that have led to the long lineups, snarled connections and canceled flights experienced by travellers at Canadian airports in recent weeks.

“I don't think there is another airline that serves Toronto that has reduced its schedule as much as we have,” von Hoensbroech said in an interview Thursday. “We have been quite proactive and thoughtful in dealing with our flight plans.”

As Canada's largest airport, Toronto Pearson has been the epicenter of the travel-related woes affecting this country's air passengers since the lifting of COVID-related public health restrictions began. Airlines and airports that reduced staffing levels drastically when air travel ground to a near-halt at the start of the pandemic have found themselves unprepared for this spring's dramatic resurgence in demand.

“We've hired more than 1,000 people over the last couple of months, and we are now hiring another 100 people just to deal with baggage challenges. We have increased our call centre staff by 20 per cent,” von Hoensbroech said.

“We are doing whatever we can to get staff in, but we also know that across all industries, we are seeing a lack of staff. It's not just a WestJet problem, it's not just an aviation problem - it's a general economy problem.”

According to analytics firm Data Wazo, 54 per cent of domestic flights to Canada's four largest airports were either delayed or cancelled over the past week. Hardest hit was Toronto's Pearson airport, with more than 700 flights (51 per cent) delayed and 15 per cent cancelled.

On Wednesday night, Air Canada said it will cut more than 15 per cent of its schedule in July and August, more than 9,500 flights, due to the strained air transport system. Most of the flights Air Canada will remove link to the airline's Toronto and Montreal hubs.

But von Hoensbroech said that because WestJet moved sooner to reduce its Toronto capacity, it is not expecting to have to make any additional “structural” cuts to its summer schedule.

“It can still happen that we have to cancel flights at short notice, as happened over the last couple of weeks as well,” he said. “But this should be to a limited extent.”

Airports in other parts of the country are operating much more smoothly than Pearson, von Hoensbroech said. In the Alberta market, for example, WestJet is back to its pre-pandemic level of flight offerings, and things are running relatively well.

Nation-wide, WestJet is operating approximately 530 flights per day this summer, or 25 per cent fewer flights than it operated in the summer of 2019.

Earlier this year, aviation industry officials had blamed COVID-19 protocols, such as Canada's random testing requirement for international arrivals, for contributing to the bottlenecks at airports.

But problems continued to escalate this month, in spite of the federal government's decision to pause that program as well as other measures like a federal hiring spree of security and customs officers.

“I think the only party to blame for this is the pandemic. Because that's where the problems have come from,” von Hoensbroech said. “I think what we can really say is there's not a single party that's not doing their homework. Everyone is trying to fix this problem.”

Von Hoensbroech said WestJet has done a great deal of contingency planning for the Canada Day long weekend, which is expected to deliver the country's highest travel volumes since 2019. However, he said the airline's operational parameters, while improved in recent weeks, are still “far from being good” - with travellers unlikely to see a significant reprieve until travel volumes drop in September.

“We have our fingers crossed that this will be a relatively stable weekend. But again, the challenges are there,” he said. “After summer break, things should look significantly better . . . And next year, we would hope we should be in a good position again.”