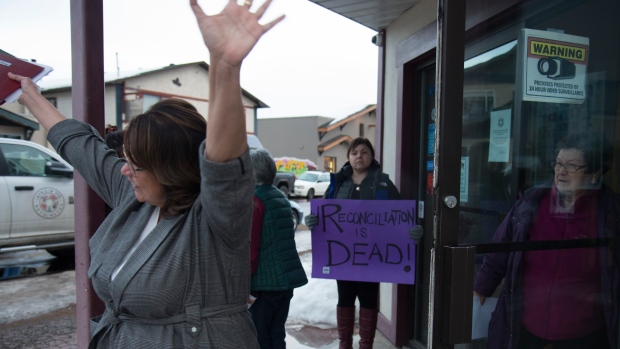 Wet'suwet'en member Bonnie George raises her arms as she leave talks with Minister of Crown-Indigenous Relation, Carolyn Bennett and the Wet'suwet'en hereditary chiefs in Smithers, B.C., on February 27, 2020. THE CANADIAN PRESS/Jonathan Hayward

SMITHERS, B.C. -- Bonnie George walked out of the Office of the Wet'suwet'en holding her hands up in the air in a triumphant gesture.

Just hours earlier, the Wet'suwet'en matriarch and former Coastal GasLink employee had complained about being locked out of the office and her voice not being heard.

Wet'suwet'en hereditary chiefs were meeting with senior government ministers over a pipeline dispute that's sparked national protests and led to railways and roads being shut down.

The hereditary chiefs who oppose the natural gas pipeline cutting through their traditional territory have seen shows of support across the country, but Wet'suwet'en members are divided on the project.

George is among those who support the pipeline and showed up with more than a dozen people at the Office of the Wet'suwet'en looking for a chance to speak.

“It shouldn't be like that,” she said, pointing at a locked door. “We need to work together as one.”

George said she wasn't invited to the meeting. Still, she went into the room on Thursday with others and made a statement, telling the gathering that the entire nation needs to be represented.

Hereditary Chief Na'moks, one of those opposed to the pipeline who has been sitting in meetings with ministers, said the Wet'suwet'en people who want the pipeline built have a “right to express themselves.”

“That's one thing about our nation. We are very democratic. We didn't chase them away,” he said Saturday.

“We listened to them.”

The Wet'suwet'en of northern British Columbia are governed by both a traditional hereditary chief system and six elected band councils.

The elected councils administer reserves, including one named the Wet'suwet'en First Nation, while the hereditary chiefs assert jurisdiction over the broader community they call the Wet'suwet'en Nation.

Five of the councils are among 20 elected First Nations that have approved the Coastal GasLink natural gas pipeline. But the hereditary chiefs maintain the band councils only have authority over reserve lands created under the Indian Act, and cannot approve the pipeline route through 22,000 square kilometres of traditional territory over which they assert authority.

A sixth Wet'suwet'en elected council, the Hagwilget, declined to sign an agreement, deferring to hereditary leadership because the pipeline did not cross the village boundaries.

The dispute over the pipeline also encompasses other unsettled land rights and title issues, including who has the right to negotiate with governments and corporations, the fact that the land is not covered by a treaty and remains unceded, and a 1997 court case that recognized the hereditary chiefs' authority and the exclusive right of the Wet'suwet'en peoples to the land but did not specify the boundaries.

Solidarity protests and blockades have broken out across the country since the RCMP moved in on Feb. 6 to enforce an injunction to stop a blockade erected by those opposed to the pipeline that prevented Coastal GasLink workers from entering the site.

While George is in favour of the pipeline now, she said that wasn't always the case.

She asked questions and did research before making her decision. She said she wants others to do the same.

“It's going to bring in resources,” George said.

Revenue from the pipeline will help pay for programs that benefit people living on and off the reserve, she said.

“It's really disheartening to see protests all across Canada,” George said.

“I don't agree with the protests. I think there is an easier way for us to sort this out.”

Elaine Morris-Stevens of the Tsayu clan also wants the pipeline built and complained that some voices in the Wet'suwet'en Nation are not being heard.

“Right now, they have three people in there who are spokespersons for us,” Morris-Stevens said.

She said the pipeline will create jobs.

Gary Naziel, a Wet'suwet'en hereditary subchief, said the only way to “fix things” is to have a feast with all the chiefs.

Although he met with the federal and provincial ministers, he waited outside the locked doors of the Office of the Wet'suwet'en with the others.

He said the pipeline will help the economy in the region.

“The truth is most of our members are for the pipeline.”