What does it mean to be a member of the PC party? 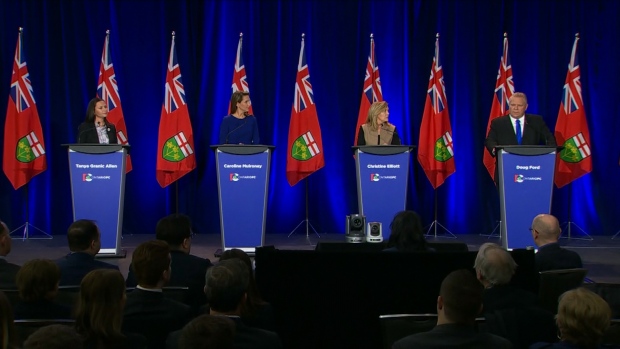 The four candidates for the Ontario PC leadership are seen at a debate in Ottawa on Feb. 28. (CP24)

About 190,000 card-carrying conservatives are waiting for the results of the Ontario Progressive Conservative leadership race, set to be announced on March 10 at the Hilton Markham Convention Centre. It has been a long process, with both candidates and voters complaining about a two-step identification process that required a mailed pin number.

With the results so close to being announced, many are wondering about the people who were allowed to vote in this election. Who are they?

These voters are PC party members, or rather members of the public who have paid to contribute to the party’s governance. For $10 a year, these members are able to be a part in the inner workings of the political party. Party members can be as young as 14, of any “race, origin, religion, or sex.” The only commitment a member has to make is to uphold the party constitution.

Hartley Lefton, Chair of the Leadership Election Organization Committee, said that being a party member is a way to “actively participate and engage in the democratic process in between elections, to support the party and possibly to help guide decision-making.”

Choosing a party leader is just one of the responsibilities of a political party member. Over the last week, members ranked leadership candidates in order of preference. The candidate that gets more than 50 per cent of the votes is named party leader. If this doesn’t happen, candidates who received fewer than 10 per cent of the electoral votes, or who appear at the bottom of the rankings, are removed from the ballets and their votes redistributed to the members second choice.

On Friday, a judge heard a case for an injunction, to extend the voting period by one week to allow the rest of the registered voters the opportunity to send in their ballets. Justice Todd Archibald dismissed the application, saying an extension would negatively impact the 61,000 people who had already voted.

Members are invited to attend annual conventions where they vote on policy resolutions, the issues that will be used as a foundation for the PC party’s election campaign. Members voted on 139 different resolutions during the Ontario PC Party convention on Nov. 25 in Toronto, with topics varying from the economy, education, and infrastructure.

These conventions are an opportunity for members and candidates to mingle with like-minded individuals, participate in campaign training sessions, and contribute to the overall vision of the party.

It costs $200 for a member to attend a policy convention compared to the $1000 ticket price for a non-member.

If there are any amendments to the party constitution -- the document that governs how the political party operates -- members also contribute to that vote. An amendment can be discussed on the floor if supported by the Constitution Committee or a group of 10 members from at least five different riding. This allows for any member to bring forth new ideas.

Members also make up the brunt of a party’s volunteer and fundraising base. After the 2016 overhauls of election financing, party candidates are not allowed to accept donations from corporations or organizations. The 190,000 individuals who purchased membership this year are a vast resource for the PC party, who need people to make donations and help canvas ridings during the upcoming election.

The results of the leadership race will be announced Saturday at a rally around 1:30 p.m.