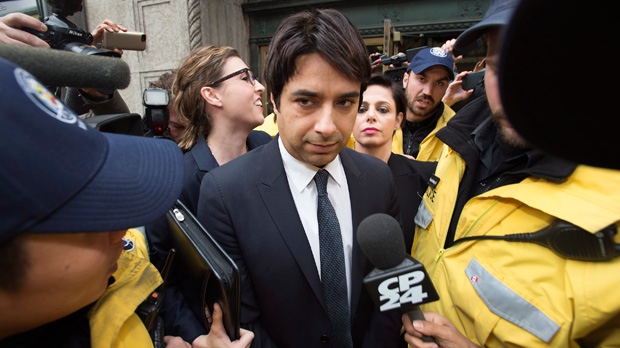 Former CBC Radio host Jian Ghomeshi, centre, is escorted by police out of court past members of the media in Toronto on Wednesday, November 26, 2014. THE CANADIAN PRESS/Darren Calabrese

All eyes will be on Toronto’s Old City Hall on Monday as the sexual assault trial for former CBC Radio host Jian Ghomeshi begins.

Here is what you need to know before the high-profile case gets underway:

What is he charged with and what are the possible penalties?

Ghomeshi is facing four counts of sexual assault and one count of overcoming resistance, choking in connection with allegations made by three female complainants. The alleged offences are said to have occurred in 2002 and 2003.

In the criminal code, sexual assault is considered to be a “hybrid” offence and sexual assault charges can be laid as summary offences (often considered to be less serious) or indictable offences (typically more serious crimes). The Crown in this case has opted to proceed summarily with the sexual assault charges, which means the maximum penalty for each of those charges is 18 months in jail. The overcoming resistance charge is an indictable offence and carries a possible life sentence.

Ghomeshi is also facing another sexual assault charge from a different complainant and that case will be dealt with during a separate trial in June.

At one point the former CBC host was facing two additional sexual assault charges but those charges were dropped in May, 2015 after the Crown said there was no reasonable prospect of conviction.

Where will the trial be held and when will there be a verdict?

Ghomeshi elected to be tried in the Ontario Court of Justice by a judge alone and did not have a preliminary inquiry. The Ghomeshi case will take place at Old City Hall starting at 10 a.m. on Monday. A verdict in the case will likely not be reached for several weeks.

Who are the key players in the case?

Ontario Court judge William Horkins is proceeding over the trial. During the course of his career, Horkins served as a Crown attorney as well as a defence lawyer and made headlines three years ago when he ruled that police ‘carding’ was unconstitutional.

Ghomeshi’s lawyer, Marie Henein, is a well-known Canadian criminal lawyer who worked under iconic defence attorney Edward Greenspan for a number of years.

She is no stranger to high-profile cases. Henein represented former Ontario attorney general Michael Bryant, who was charged with criminal negligence causing death and dangerous driving in connection with the death of cyclist Darcy Allan Sheppard in 2009. The charges against Bryant were ultimately dropped.

Michael Callaghan is the lead Crown prosecutor in the Ghomeshi case. Speaking to The Canadian Press, the president of the Criminal Lawyers’ Association, described Callaghan as a “well-balanced prosecutor” with a reputation for “good judgment” and good “trial skills.”

Has Ghomeshi spoken publicly about the charges?

While he has never spoken directly about the charges, shortly after CBC abruptly cut ties with the popular radio host in October 2014, Ghomeshi released a statement on Facebook claiming that he was the victim of a “campaign of false allegations.” He claimed that while he did engage in rough sex, it was always consensual.

In the weeks that followed, a total of nine women came forward to media outlets alleging Ghomeshi has assaulted them. On Oct. 31, police announced that they were investigating Ghomeshi after two women contacted investigators. The next day, a third woman came forward and on Nov. 26, Ghomeshi was formally charged with four counts of sexual assault and one count of overcoming resistance, choking.

Three new charges of sexual assault were later laid against Ghomeshi but two were dropped in May, 2015.

Ghomeshi has not made any sort of public statement since he was charged.