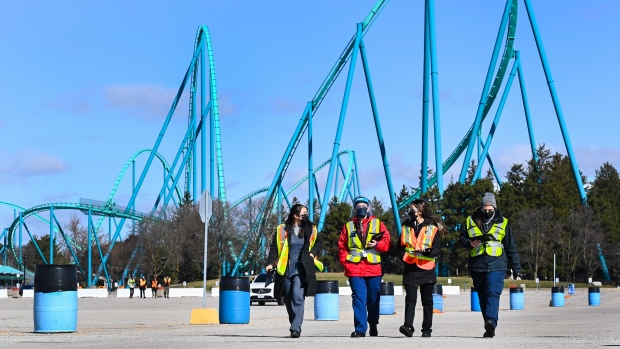 Health-care workers get ready to take patients at a drive-thru COVID-19 mass vaccination site at Canada's Wonderland during the COVID-19 pandemic in Vaughan, Ont., on Monday, March 29, 2021. People don't have to leave their vehicles to get their dose of the vaccine. THE CANADIAN PRESS/Nathan Denette

Three COVID-19 vaccination clinics in York Region will temporarily close at the end of this week due to a lack of supply, including the drive-thru clinic at Canada’s Wonderland that just opened today.

In a statement, Patrick Casey, the director of corporate communications for the region said that the clinics will close on April 2 until at least April 5. The clinics include the Georgina Ice Palace in the Town of Georgina, the Aaniin Community Centre in the City of Markham and the drive-thru clinic at Canada’s Wonderland.

All other clinics will continue to operate at capacity, Casey said.

The drive-thru clinic at Canada’s Wonderland had just begun to accept appointments on Monday and was expected to help vaccinate about 1,600 people a day.

York Region cited “delays in anticipated shipments of the Moderna vaccine” as the reason for the temporary closure.

Canada was supposed to receive about 846,000 doses of the Moderna vaccine this week, but only received a partial delivery due to a backlog in its quality assurance testing, according to the government.

York Region says they expect the clinics to reopen on April 5 as a result of these additional vaccine deliveries.