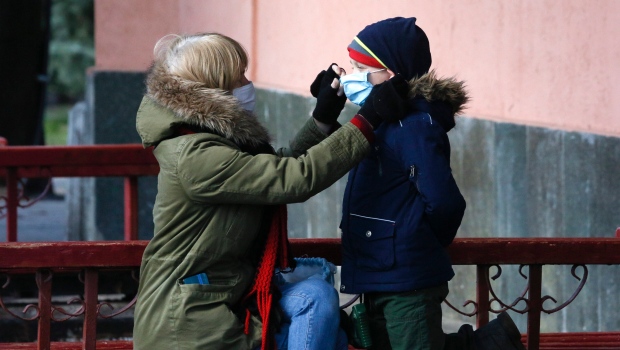 A mother puts a face mask on her child in a city park in Kyiv, Ukraine, Tuesday, March 24, 2020.(AP Photo/Efrem Lukatsky)

TORONTO - Lily Francois battled insomnia for a solid week, waking up at 3 a.m., and then struggling to get back to sleep.

So the 13-year-old from Cole Harbour, N.S., decided to switch things up, pitching a tent in her living room and camping out with her younger sister.

Like most Canadian kids, Francois said she's felt the emotional toll of COVID-19.

“There's some days where I'm fine and I feel pretty motivated to do things like clean up around the house, do my schoolwork, work out,” Francois said. “But sometimes it's really hard. . . when you're just stuck in your house and you're doing the same thing over and over again.”

Most Canadian teenagers say they're experiencing feelings of sadness due to the global pandemic, according to a survey released Thursday that sheds light on youths' feelings, behaviours and attitudes.

The Social Impacts of COVID-19 on Canadian Youth web survey asked kids aged 12 to 17: How fearful are they of catching the coronavirus? How do they feel about online schooling? Who do they reach out to for information?

“The feelings of anxiety and uncertainty, even though there is a mixed range of emotions, they're still very high and prevalent,” Ashley Manuel, assistant director of the Association for Canadian Studies, which conducted the study in partnership with Experiences Canada and the Vanier Institute of the Family, said during an online news conference.

“And because mental health issues have kind of always been something that this generation has struggled with, they're definitely more at the forefront during this time.”

The study found 72 per cent of girls reported feeling sad often or sometimes, while 55 per cent of boys did.

“I miss laughing, honestly. My friends and I would laugh all the time, we'd find something that was hilarious, and be hysterical over it,” said Chase Ellis, a 13-year-old from Toronto. “It's very hard not being able to be with family and friends, that's what makes me the most sad.”

Deja Lee, a 16-year-old from Surrey, B.C., said she rarely feels cheery, but said it's more indifference than sadness.

“You just feel less motivation to do things when you're in the same environment constantly, day in and day out,” said Lee, a top basketball player for her age in B.C. “I'd rather be out with my friends, so I kind of like developed this sense of, not loneliness, because I still have my family around me, but I'm disappointed in a way that I don't get to see my friends and do the things that I usually do.

Canadian kids are also running out of ways to entertain themselves - 84 per cent of female respondents, and 85 of males reported feeling bored.

But feelings of joy were also reported, with 86 per cent saying they have “often and sometimes” felt happy since the COVID-19 crisis began. The number was slightly higher among kids aged 12-14 than kids in the 15-17 age group.

“It's interesting to see . . . a more nuanced understanding to what all of this means, as they are reporting feeling happy as well,” Manuel said.

And 74 per cent of kids who had responded that they were “very afraid” of catching the virus also reported they often or sometimes have a hard time sleeping.

“If I got it, I don't know what I would do because then I would have to stay in my room, and do my school work and I wouldn't be able to see my family, and go outside, which is what really is helping me in this - going outside when it's nice out,” Francois said. “And also, my grandmother is older, obviously, and if she caught it, I don't know what would happen, so I'm really worried about that.”

While almost all the respondents said they missed being in the classroom, the majority of them are doing less than four hours of school work a week.

“It's an important takeaway in the sense that doing homework less often is . . . a trend to be concerned about when we go into the fall,” Jedwab said. “It could mean that it'll be increasingly challenging for educators to keep our youth up to the necessary standard with respect to their education.”

“If you consider that relative to how much school work they typically get in a week going to school, that's quite a drop,” said Deborah Morrison, president and CEO of Experiences Canada.

The Grade 12 and CEGEP numbers weren't surprising, said Morrison, since “marks are already into universities and pretty much your school year is well done.”

But the low numbers in other age groups were worrisome, and suggest that online environments aren't working for many kids.

“So, if you're doing less work, and the platforms aren't intuitive for you and you don't feel that you're learning much, then I think we may have a problem going into the fall,” Morrison said. “And I know all of the provinces are already on this issue in working hard to figure out better strategies for online learning to bridge that gap.”

Morrison noted that while school work was going down, housekeeping improved by about 40 per cent.

“I'm sure parents are pretty delighted about that,” she said.

The study found that parents were the biggest source of COVID-19 information for their kids, and so Nora Spinks, the CEO of The Vanier Institute said it's important for parents to keep those lines of communication open.

“Ask (kids) questions. Share your own ambiguity around your feelings, so without terrifying them or scaring them at all, letting them know that some days you're having a good time, and some days not so much,” Spinks said.

The web study, conducted in partnership with Experiences Canada and the Vanier Institute of the Family, was conducted between April 29 and May 5, and had 1,191 respondents.