Omar Khadr shot twice in back by special forces soldier

GUANTANAMO BAY, Cuba - Seconds after storming an Afghan compound on a blistering July day, a special operations soldier killed a man with a single shot to the head, then shot a second man twice in the back.

The second man, who had been sitting with his back to the soldier leaning against some rubble in an alley, was a 15-year-old Canadian, Omar Khadr.

The testimony at Khadr's war-crimes trial came Thursday from Sgt.-Maj. D, who testified that a hand grenade tossed from the same alley had moments earlier sailed over his head and exploded behind him.

A piece of shrapnel from that grenade hit U.S. special forces Sgt. Chris Speer in the head.

Speer was not wearing a helmet.

The United States has charged the Toronto-born Khadr with murder in violation of the law of war for allegedly throwing the fatal grenade.

D testified he and other special forces rushed in under small arms fire from the alley within minutes after the compound had taken a direct hit from a bomb.

"I believed at least two people in the alley were hostile toward us," D said.

He said he first saw a person in the back of the alley with an AK-47 assault rifle, who was moving and making a noise.

He shot him in the head.

He then spotted the unarmed Khadr, he said, pointing to a large model of the compound in the courtroom.

"I engaged that person with two rounds in the back."

He was "fairly certain" he had killed the man, until he tilted Khadr's head back and "thumped him in the eyes to see if he would react."

The testimony came at the end of a day that began with dramatically differing portrayals of Khadr -- who faces five war-crimes charges -- and ended with the dramatic collapse of Khadr's lawyer.

Lt. Col. Jon Jackson, the Pentagon-appointed lawyer who is Khadr's only advocate at the military commission hearing, was taken from the courthouse by ambulance.

Bryan Broyles, deputy chief defence counsel with the Office of Military Commissions, said Jackson might need to be flown to the mainland for treatment.

That raised the spectre of a lengthy delay in the proceedings.

"We don't know what his short-term prognosis is," Broyles said.

"He will not be in court Friday."

The day began with prosecutor Jeff Groharing telling the jury comprising seven military officers that Khadr was a trained al-Qaida terrorist who bragged about killing Americans.

The defence portrayed him as a frightened, wounded child caught up in a deadly situation through no fault of his own.

"Omar Khadr is a terrorist who was trained by al-Qaida who murdered Sgt. 1st Class Christopher Speer," Groharing told the jury as the soldier's widow watched.

"Khadr decided to conspire with al-Qaida so that he could kill as many Americans as possible."

"It would land at (Speer's) feet," Groharing said.

Speer died eight days later from a shrapnel wound to his head.

Khadr's charges include murder in violation of the law of war for Speer's death.

A military commission jury of four men and three women, all U.S. officers, is hearing the case.

"This trial," the prosecutor told them, "is about holding an al-Qaida terrorist accountable for his acts and vindicating the laws of war."

For his part, Jackson described how Khadr had been blinded by shrapnel and cowered in an alcove as a fierce firefight and bombardment by U.S. forces raged for up to four hours.

"He is a boy, with three other men who are bad men," Jackson said.

"He is scared. He is bleeding. He is blinded."

Khadr was at the compound only because his father, Ahmed Said Khadr, a close associate of Osama Bin Laden, told him to be there, the lawyer said.

"Ahmed Khadr hated his enemies more than he loved his son."

Jackson said the defence would bring in an American interrogator who told the badly wounded Khadr about an Afghan kid who was gang-raped by "four big black guys."

"That is not just some story," Jackson said.

"This is someone who is in the control of the United States army and he is scared to death."

The first prosecution witness, identified as Col. W, testified to writing a memo soon after the attack that killed Speer in which he stated the person who threw the lethal grenade had been "killed."

Years later, after being approached by military commission investigators, he changed the word "killed" to "engaged," purely to correct his personal historical record, he said.

Jurors also saw a video showing a goofy, grinning Khadr, who appeared to be 14 or 15, making IEDs with other men on the carpet of a room.

The video, retrieved from the rubble of the compound a month after the bombing, also shows the men planting IEDs at night.

Khadr, who was in court in a jacket and tie and sporting a haircut and trimmed beard, faces a life sentence if convicted. 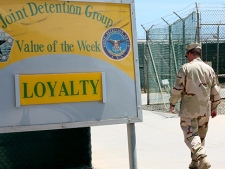 A sailor walks past a sign at the detention camp where Canadian Omar Khadr is being held on Wednesday, Aug. 11, 2010, in Guantanamo Bay, Cuba. (THE CANADIAN PRESS/Colin Perkel)