Ontario Provincial Police say they have temporarily condemned between 80 to 100 homes in Angus, Ont., as crews work to assess the damage caused by a tornado that tore through the town late Tuesday afternoon.

Environment Canada previously confirmed that a tornado hit the community at around 5:20 p.m. and lasted about a minute before making its way east towards Barrie.

The storm left a massive trail of debris in its wake and on Wednesday morning a number of homes could be seen with entire roofs and walls missing.

“I know that it is not nice to be out of your home, but we can’t have people going in to places that are unsafe,” Const. Kelly Daniels told reporters in one badly hit neighbourhood Wednesday morning. “There could be damage on one person’s property that may affect somebody else’s property and of course we need to look at foundations and things like that.”

Daniels told reporters that she has no idea how long it will take building inspectors to assess the damage at each affected residence.

In the interim, she said several local pharmacies have volunteered to refill prescriptions for residents who may have left important medication inside their homes.

The Angus Recreation Centre has also been made available as a shelter and police are maintaining a perimeter around damaged homes to ensure that any valuables inside are protected.

“We are making sure that the scene is secured and now that we know all the residents are safe their property is our utmost concern,” Daniels said.

During the height of the storm, winds speeds hovering around 180 kilometres per hour were reported, resulting in significant damage to area homes, split trees and downed power lines.

Hydro crews were back on the street at sunlight to assess the destruction and begin the cleanup.

“It is pretty bad. Some houses have almost their entire roofs off, some half the roof off and some the whole back of the house has collapsed,” Simcoe-Grey MPP Jim Wilson told reporters Wednesday. “It’s devastating. When you see entire bedrooms just torn off and lying on the street, well it is just a good thing nobody was sleeping in those beds.”

Because a state of emergency was declared in the Township of Essa, the community will qualify for provincial assistance and Wilson told reporters that he has already spoken to the Community Safety Ministry and advised them that an “application will be coming forward.”

Meanwhile, MP Kellie Leitch paid tribute for the community for its response to the storm Wednesday morning.

“Everyone has come together,” she told reporters. “It is amazing how neighbours help neighbours and I have already heard from people across the country saying that they are willing to help.”

While the most significant damage from the storm was reported in Angus, other parts of southern Ontario were also battered.

Rob Kuhn, Environment Canada’s lead meteorologist at the Ontario Storm Prediction Centre, told CP24 that officials are currently investigating a second report of a tornado north of Walkerton. However, no damage has been reported in that area.

In York Region, a 60-year-old Richmond Hill man remains in critical condition in hospital after he and three other men were struck by lightning at a York Region golf course early Tuesday afternoon.

Parts of Markham on Warden Avenue were also blocked off after the storm downed 12 power poles. Between 75 and 80 customers remained without power by 6 a.m., a far cry from the 13,000 customers without power in the immediate aftermath of the storm.

“The work that is required now is to reset each one of the 12 (downed) polls, restring the conductor and reenergize the service and that will take 24 to 48 hours. We are just very thankful that this event occurred without any harm to anyone on the site,” Powerstream President Brian Bentz told CP24.

In Toronto, Hydro crews faced a bigger challenge as about 1,000 customers across the city remained without power as of 6:30 a.m.

In a tweet send out at around 4:30 p.m., Toronto Hydro said that all customers affected by the storm had been restored.

Environment Canada is calling for a risk of thunderstorms Wednesday afternoon. Chatham-Kent, Windsor, Essex County and surrounding area remain under a severe thunderstorm watch. A fog advisory was issued for the Grey-Bruce region. 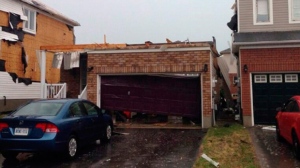 A look at some pictures of the severe weather that hit the region on June 17, 2014.

Damage to houses is shown in Angus, near Barrie, Ontario on Tuesday, June 17, 2014. Provincial police say there are reports of some minor injuries after severe weather ripped through the central Ontario community of Angus. (The Canadian Press/Julie Wilhelm)

An overturned truck sits in the driveway of a storm damaged house in Angus, near Barrie, Ontario on Tuesday, June 17, 2014. (The Canadian Press/Christopher Bentley)