TORONTO -- Inae Lee knows she won't have the support of her South Korean parents as she weds her partner in Toronto today, but she's hoping the 109 other couples tying the knot beside her will make up for her family's rejection of her relationship.

Lee will be just one of the participants in a mass wedding for lesbian, gay, bisexual, transgender, queer and two-spirited couples, which is considered the first of its kind in Canada.

The Grand Pride Wedding will involve couples from across Canada as well as participants from countries where same sex marriage is illegal.

For Lee, the event is historically significant.

"I really want to let them know that we are celebrated, and it's ok for us to get married."

Lee is getting married to Jenny Chang Ho, who is originally from Venezuela. The pair met in Toronto two years ago and have been together ever since.

"This actually makes us appreciate more that we're able to do this and be able to live in Canada," Chang Ho said. "It's very accepting and more diverse than other countries."

For Cindy Su and her partner Lana Yu, Canada is a leading example when it comes to the acceptance of same-sex couples.

"We're really jealous of Canada," said Su, who travelled with Yu from Taiwan to tie the knot in Toronto. "We're looking forward to this happening in our country."

Both women spent time studying in Canada years ago, but only met four years ago in Taiwan. Although Yu's parents don't know about Su, the couple is determined to move the relationship forward and has even planned to try in vitro fertilization in Vancouver after the wedding.

"We figured we didn't really want any objection to stop us from doing what we want in life," she said. " I'm actually looking forward to what happens when we go back. Obviously maybe in the future there will be some problems with the legality but now that we want to start a family, we have to be really brave."

Organizers say up to 1,000 people are expected to attend Thursday's Grand Pride Wedding, which is believed to be the largest of its kind in North America.

It's being held at Casa Loma, a palatial Toronto home built between 1911 and 1914, which has since become a popular tourist attraction and event venue.

"What we see Casa Loma as is this grand lady at the top of the hill watching Toronto evolve," said Nick Di Donato, president and CEO of the Liberty Entertainment Group which operates the facility and is hosting the event. "This is a dramatic part of that evolution."

Di Donato's company is taking on all costs for the event, with the couples only having to pay for an Ontario marriage licence.

"It's a lifetime event and something they'll remember forever," he said. "Most of these couples are from outside Toronto -- they become our ambassadors for the city of Toronto in terms of the openness of the city and the welcome that we've provided them."

The venue is of particular significance for Windsor, Ont., resident Aaron Bergeron, who is marrying partner Kenneth Grundy. The couple first visited Casa Loma when they were in Toronto two years ago.

"We were walking around in it and I was like 'how awesome would it be to get married here,"' Bergeron said. "When we found out that that's where they were having the giant ceremony, I was like, this has to happen."

Bergeron also loves the fact that his marriage is going to be part of a much larger celebration.

"We're all getting together because we love the person that we're with and we want to express that."

Despite the significance -- and scale -- of the celebration, some warn that the rights of lesbians, gays, bisexuals, transgenders, queers and two-spirited people (a First Nations term for individuals who are considered to be neither women nor men) still can't be taken for granted.

"This says a lot about acceptance and change in our society, but I don't think we should think that marriage is the great equator of equal rights and human rights," said Helen Kennedy, executive director of national charity Egale, which was involved in planning the "big fat gay wedding"

"We constantly hear things like 'oh, now you have marriage, now what do you want."'

Kennedy added that more work still needed to be done to combat issues like homophobic bullying, hate crimes and an overrepresentation of LGBTQ individuals among the homeless.

"It's an amazing thing for these couples to express their love and devotion for each other in this ceremony, but we have to remember all of those other people who are still struggling." 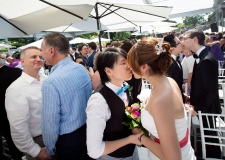 Over 100 gay couples participate in a mass wedding during WorldPride 2014 at Casa Loma in Toronto, Ont., on Thursday, June 26, 2014. (The Canadian Press/Darren Calabrese)